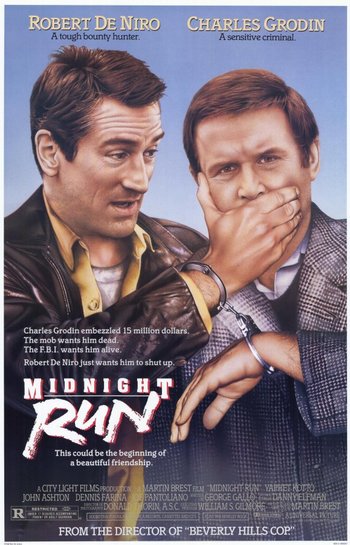 Jonathan Mardukas: Jack, you're a grown man. You have control over your own words.
Jack Walsh: You're goddamn right I do. Now here come two words for you: shut the fuck up.
Advertisement:

De Niro plays Jack Walsh, an unfairly disgraced ex-cop turned bounty hunter charged with finding fugitive mob accountant Jonathan Mardukas (Grodin) and returning him to Los Angeles before the deadline expires on his bond. Walsh must travel cross-country while contending with: a rival bounty hunter; the FBI, who are trying to catch Mardukas; the Mafia, who are trying to kill him; and Mardukas, whose eccentricities make him a difficult prisoner.