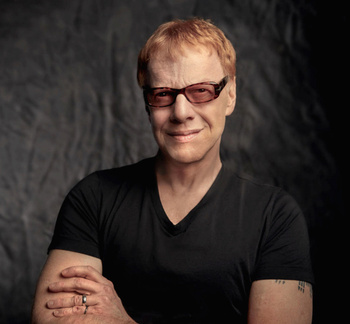 Not an actual elf, man.
"When I'm writing music, so much of the time I feel like I'm being pulled around by a big dog. I've got the dog on a leash and sometimes I'm leading this dog along just where I want it to go. And then sometimes the dog gets real big and starts yanking me. I think when I'm reacting the way I should be, I let the thing yank me around. Because it yanks me into places where I wouldn't go. And I look at it and go, "Oh! Thanks, boy! It's a strange place, but there had to be a reason why I went here, so I'm just going to leave it."
Advertisement:

Daniel Robert Elfman (born May 29, 1953) is an American composer and singer born in Los Angeles, California.

A former leader of Oingo Boingo, he first broke into film scoring with Pee Wee's Big Adventure. Since then, he has worked steadily in Hollywood (most famously for Tim Burton, to the point the two are often mentioned in the same breath, and for a longtime friend Sam Raimi), composing dozens of scores and themes for movies, TV, and even video games and a Cirque du Soleil show (IRIS, a 2011 show inspired by the history of cinema).

An excerpt from his main title for Sommersby was later adopted by Regency Enterprises (the company that produced the film) for its logo; on the other hand, Elfman wrote the logo music for Hollywood Pictures several years before he did his only feature score for the company (1995's Dead Presidents).

Like John Williams, Elfman tends to compose classical, Romantically-themed music reminiscent of Bernard Herrmann, although Elfman makes more limited use of Leitmotif and his music tends to have darker overtones — which seem to mesh well with Tim Burton's films, although he also has a penchant for Duke Ellington-style Jazz. Again like John Williams, Elfman is one of the few major Hollywood film composers who has never had a score thrown-out (the closest being his score for Spider-Man 2 being extensively rewritten and altered without his permission).

His scores are frequently used in trailers. Elfman also has a cameo in a film he didn't score, Sam Raimi's The Gift, he also appears As Himself with his band Oingo Boingo in the classic 1986 comedy Back to School.

He's married to Bridget Fonda, and they have a son together named Oliver, which in old English means "Elf Army", amusingly. He also has two daughters, Lola and Mali, from previous relationships.

Works done by Elfman include (but are certainly not limited to):