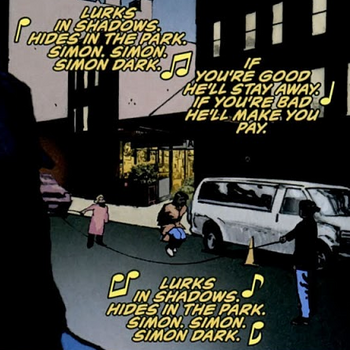 If a program or film wants to add fear to a scene one of the most creepy ways is to have a Creepy Child, or a whole creepy choir, singing somewhere in the distance or background, usually the tune is a mournful nursery rhyme. Sometimes it will seem like the characters can hear it and they may even call out, asking if anyone is there.

In Japanese works the Playground Song Kagome, Kagome is a popular choice for this, due to its sinister-sounding lyrics. Said lyrics include the line "Who is now behind you?", which makes a perfect cue for a Jump Scare.

Compare and contrast: Ironic Nursery Tune which is always something the characters can hear and is often said or sung by one of them. Compare Ominous Latin Chanting. Contrast Cherubic Choir.

Some children creepily sing that the clock is ticking, even for the Doctor.

Some children creepily sing that the clock is ticking, even for the Doctor.