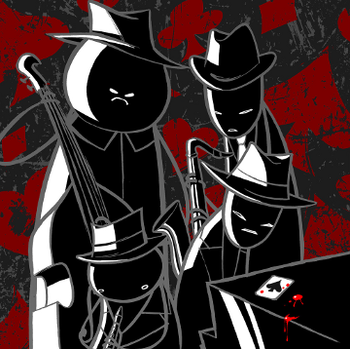 The dangerous band of mobsters threaten you with their sinister shadow-based magic. One of them tries to intimidate you with the ace of spades.
Advertisement:

In modern times, Jazz is typically known for being fun and catchy or artsy and highbrow. In fiction, jazz soundtracks, often slowed down or played in a minor key, can add an air of creepiness that often comes through association with a villain.

Like Rotten Rock & Roll and Freaky Electronic Music, Jazz music is (or at least, used to be) rebellious in nature. One of the many genres that adopted the title of "Devil's Music", Jazz was considered counter-culture at its height. Paranoid parents and the critical establishment disparaged it as "evil" and "vulgar", perhaps due to its initial popularity among African-Americans and its association with gangsters and drug use. Those Wacky Nazis considered Jazz to be "Negermusik

" (negro music) tainted by Jewish influence and labelled it as "degenerate" and prohibited it. Non-traditional musical elements such as syncopation, dissonance, and unusual time signatures and chord progressions can make Jazz seem chaotic (many detractors described as "just noise") and thus menacing.

In fiction, jazz can be used to characterize the Deep South in its more ethnic areas, be it in the swinging streets of New Orleans or other hot spots. When played for creepiness, it may be heard in Southern Gothic and City Noir settings.

Some possible Trope Codifiers are old black-and-white cartoons from the early days of The Golden Age of Animation. Cartoons like these often paired catchy jazz music with Disney Acid Sequences, Rotoscoping (which, to some people, falls into the Uncanny Valley), and other types of Deranged Animation.

It's often associated with The Gambler types and other Wicked Cultured villains.

May overlap with Sexophone when Evil Is Sexy. Compare Creepy Circus Music, which may have a similar, "broken down" mood. Contrast Sinister Tango Music.

Example of:
The Old North Wind