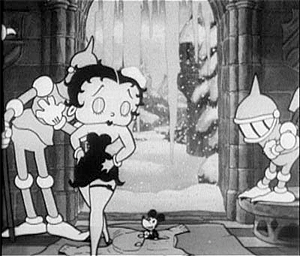 This 1933 Betty Boop short is a very, very loose adaptation of the original tale of Snow White, not to be confused with the Disney version. During wintertime, Betty visits her step-mother the queen, with the two guards Koko The Clown and Bimbo the Dog being instantly smitten by her. After the queen is told by her Magic Mirror that Betty is the fairest in the land, she orders her beheaded. However, Bimbo and Koko are too infatuated to comply with this order and fall down the hole that was intended for her-as Betty escapes and gets frozen in an ice block in the process, with the seven dwarfs carrying her away. The rest of the short is centered around Koko and Bimbo as they try to save her.

This short is in the public domain and can be viewed here.

On a side note, this short was something of a one man show-the only animator on this short was dedicated Fleischer employee Roland "Doc" Crandall, as a reward for his years of hard work at the studio. It took Crandall just six months to complete the seven-minute short.