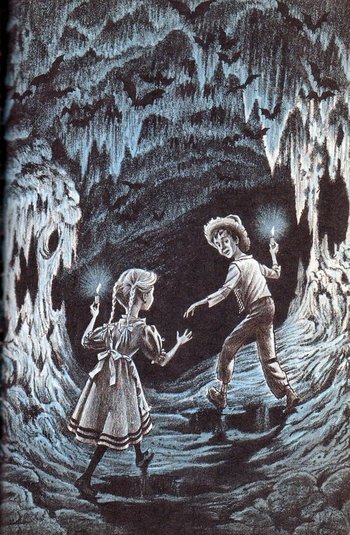 Let's just hope those aren't Vampire Bats.
"The 'call of the void' is rarely more apt than when talking about the depths. I felt it well within that cave. And in fiction, too, the depths are consistently linked to that alluring feeling of self-destruction."
— Jacob Geller, "Fear of Depths"

Caves in fiction are generally portrayed as unsettling at best, frightening as a rule, and downright horrifying at worst.

There is good reason for this, as caves in Real Life can be extremely hostile environments to humans. The lack of light alone is enough to scare off many, and even the most intrepid explorer has to contend with hazards from rock falls to flooded areas to plain old hypothermia and exhaustion—not to mention the twisting, turning, often labyrinthine structure of the cave itself. Caves can be deadly, and we are not ideally evolved to inhabit them.

Many works of fiction will take these already present dangers to extremes, often while adding in the threat of some sort of blind subterranean predator or other creepy creature. And possibly a connected Ancient Tomb full of skeletons and curses. Maybe the cave is the monstrous skull of a giant beast that is occupied by villains or other monsters. Perhaps the cave in question was once occupied by such horrors but now lies empty and devoid of life, only for travelers to get the creepy sensation of Being Watched. Oh, and did we mention the possibility of slumbering dragons? Expect any character foolish enough to enter a cave who doesn't encounter one of these nasties to end up buried alive, skewered by a falling stalactite, burned by lava, or driven mad by the darkness, isolation, getting lost in a labyrinth and impossibility of escape. The lucky ones who do see daylight again will be shaken and possibly scarred for life by the experience.

The milder version of this trope, common in children's media, is when caves are simply depicted as dark and spooky places inhabited by bats and with chilly winds blowing out of them. Entering a cave is a common visual shorthand for confronting one's fears.

A Primal Fear. Subtrope of Nature Is Not Nice and often Forbidden Zone. A staple setting of the Doomed Expedition. Supertrope to Abandoned Mine, Sinister Subway, and Dug Too Deep. Sometimes illustrated through Cave Mouth, where the entrance to a cave resembles an engulfing maw, or Cobweb Jungle. May overlap with Beware the Skull Base, Beneath the Earth, The Underworld, Elaborate Underground Base, Secret Underground Passage, Eldritch Location, Thrown Down a Well, or even Underground City. Often present in a video game's Underground Level. Compare Eldritch Ocean Abyss, The Maze, Don't Go in the Woods, Hungry Jungle, Swamps Are Evil, Creepy Basement, and Absurdly-Spacious Sewer. Contrast Evil Tower of Ominousness. See also A Way Out of a Cave-In.