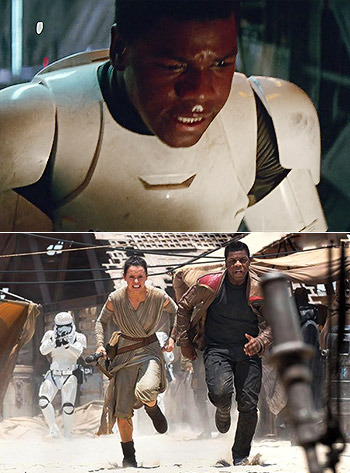 From 'trooper to TRAITOR!
"But at midnight Paul and Silas were praying and singing hymns to God, and the prisoners were listening to them. Suddenly there was a great earthquake, so that the foundations of the prison were shaken; and immediately all the doors were opened and everyone’s chains were loosed. And the keeper of the prison, awaking from sleep and seeing the prison doors open, supposing the prisoners had fled, drew his sword and was about to kill himself. But Paul called with a loud voice, saying, 'Do yourself no harm, for we are all here.'

"Then he called for a light, ran in, and fell down trembling before Paul and Silas. And he brought them out and said, 'Sirs, what must I do to be saved?'"
— Acts 16:25-30, The Bible (NKJV)
Advertisement:

Well, the heroes just got themselves captured in a spectacular case of Cutscene Incompetence. Sadly, the guards are competent and won't let them leave. What are the heroes to do?

Talk to the guard.

No, seriously. Half the time they're part of a Weird Trade Union or are Punch Clock Villains and otherwise normal people. If somebody is Only in It for the Money, their loyalty can quickly change to whoever offers more money. Ask them if they know what their boss did to Bob, or plans to do to their family. Do they know the scar behind their left ear contains a mind control device? How about that their boss can remote activate a Cyanide Pill he had installed during their last trip to the dentist if things go south?

If that doesn't Scare 'Em Straight, then ask them about their wife and kids, hobbies, or sports team. An ounce of Character Development will make them a Mauve Shirt and get them to do a Heel–Face Turn faster than you can say "No Dental".

If that doesn't work, just bribe them. Filthy lucre can work remarkably well on the morally flexible, and just because you're heroes doesn't mean you can't exploit the inherent flaws of evil. If the villain keeps a Paid Harem nearby, seducing the concubines or appealing to their good nature usually works. Or just tricking them into getting the key; they aren't usually very bright.

Mooks turned allies this way might never graduate to the main cast, but even if they don't do a full Heel–Face Turn, the heroes will have made an important ally for the episode and the mook in question will get all the attendant perks and dangers of being a Mauve Shirt. This can be especially beneficial to some heroes, as these Mook Face Turners can be Defecting for Love.

See also Not Always Evil, Merciful Minion, and Talking Your Way Out.