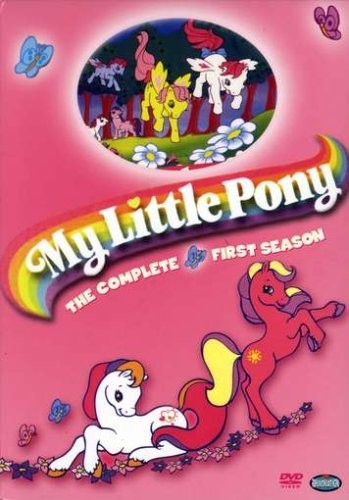 My Little Pony 'n Friends is an animated TV series that was released by Claster Television, Inc. and produced by Hasbro, Marvel Productions and Sunbow Entertainment in 1986 and ran until 1987. It was based on the toyline of the same name. It came out a few months after My Little Pony: The Movie and ran for two seasons. It was an Animated Anthology, featuring quarter hour shorts. The first half of the show would have an episode of ponies, and then the second half would feature an episode of their friends, Glo Friends, Moondreamers, and Potato Head Kids. As a result, the pony episodes often ran as television serials, as did the other shorts.

This incarnation of My Little Pony was set in a world called Ponyland. Ponyland is a Magical Land on the other side of the rainbow, populated by Bushwoolies, Sea and Flutter Ponies, Grundles, bee-people, talking pigs, giant terriers, bird-dog hybrids, zebra-people, evil storm clouds, elves, bigfoot-like people who build forests, and monster weeds, among other, weirder things. The ponies are assisted in their adventures by an Earth teen named Megan, her siblings Molly and Danny, Spike the Baby Dragon, and the Moochic, a scatter-brained gnome wizard with mushroom motif, and his Beleaguered Assistant, Habit the Rabbit.

Being a fantasy-esque weekday afternoon cartoon, the episode plots were adventures, normally focused on a Victim of the Week requiring the ponies' help to defeat some Big Bad. The weirdness — and the overt scariness of some of the villains — kept the show from being as dangerously cute as one might naturally assume. Some episodes did not involve sugar apocalypses, though, and rather focused on more mundane plots, such as using one's imagination to have fun, scavenger hunts, taking care of a giant dog, dealing with bullies, and mending friendships after a feud escalated to ice cream warfare.

The episodes focused on My Little Pony ran for 65 episodes in total. There were 16 multi-part serials, each 2-4 parts long with the sole exception of the ten-part pilot, and 9 stand-alone episodes, as well as two 2-part serials compressing the My Little Pony TV Specials.

Glo Friends, Potato Head Kids, and Moondreamers have their own pages.

We Are The Flutter Ponies!

Example of:
"I Am Great!" Song

We Are The Flutter Ponies!