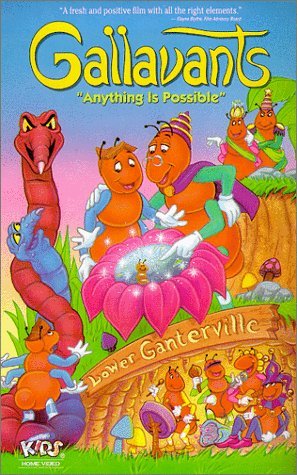 An animated film from 1984, Gallavants follows the adventures of a member of a species of anthropomorphic ants called Gallavants, who live in a colony called Ganterville.

Like real ants, they have a highly structured society where every individual has a role to play in the colony. Also, like real ants, they are ruled by a queen. All Gallavants are born from eggs and raised by the Attend-ants (if you're not prepared for a lot of bad ant puns, stop reading now), the resident nanny ants. Once they reach a certain age, they are taught by the local Major Mentor, who makes it his job to teach them the ins and outs of Gallavant society. A Gallavant is considered to be an adult when he or she receives a 'kabump'. This takes place at a large ceremony where all Gallavants of a certain generation receive their kabumps. Or so that's how it's supposed to go...

One certain Gallavant, named Shando, is convinced that he doesn't need lessons to find his place in the colony. He desires to be a music ant but is too lazy to put any effort into learning what he's supposed to learn.

He gets into a series of misadventures, which include a failed attempt at getting a kabump and nearly getting eaten by a Vanterviper. Ultimately, he is able to earn his kabump and fulfill his dream of being a music ant.

A staple of mom-and-pop VHS rental stores and of Nickelodeon's "Special Delivery", the Gallavants are still much-loved in their native Scandinavia but are known in America only for this movie. Which is, in case the plot description didn't clue you in, really weird. A review can be read here

Not to be confused with that similarly named live-action musical/comedy by Alan Menken.