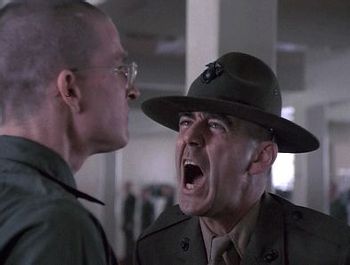 You call this a trope entry, maggot?!
"If you ladies leave my island, if you survive recruit training, you will be a weapon. You will be a minister of death praying for war. But until that day, you are pukes. You are the lowest form of life on Earth. You are not even human fucking beings! You are nothing but unorganized, grabastic pieces of amphibian shit! Because I am hard, you will not like me. But the more you hate me, the more you will learn."
— Gunnery Sergeant Hartman, Full Metal Jacket
Advertisement:

His job is simple — turn the bunch of maggot recruits that are the regulars into lean, mean fighting machines. The more you hate him, the more you will learn! So he gives you Training from Hell and often seems to revel in it. In a way, he's the military trainee's equivalent of a Mean Boss, but there's seldom any other type.

The only training method that Drill Sergeant Nasty knows is The Spartan Way. He yells. He carpet bombs your ears. He makes you scrub floors with toothbrushes. He will make you drop down and give him 20, 50, or whatever arbitrary number he comes up with. He tends to use Sound Off in drills a lot. Eventually, you'll hate his guts, which is usually exactly how he wants you to feel. He is usually played by R. Lee Ermey (who actually was a Marine drill instructor for two years) or a Scary Black Man (see: Louis Gossett, Jr.).

On kids' TV, this same character is a gym teacher, coach, or another authority figure, but not necessarily a Sadist Teacher. Often a former drill instructor who has trouble hanging up the chevrons (the fact that the Presidential Fitness Test, which was used as the benchmark for fitness in U.S. schools from 1956 to 2013, was primarily a milestone of fitness for the military

The episode will often imply that Drill Sergeant Nasty is right: that, abrasive though he may be, everything he does is for your own good and everyone will come out the better for it (or at least, better able to survive Hell). Of course, in the film Full Metal Jacket, the Trope Codifier drives one of the recruits into a mental breakdown that results in a Murder-Suicide, an outcome that you almost never see in any other examples.

He will often address those under his command as "maggots" or "ladies", or any other insults he can think of to motivate the people under him. He may also dish out (often derogatory) nicknames.

In Britain, the popular image is of the Sergeant Major, who is usually much less abusive, but no less demanding, and may or may not be marching up and down the square. If a British work has Shown Their Work, this role may well be filled by the Provost Sergeant, who is in charge of base discipline, and who the drill sergeants send recruits to go and see for their punishment.

In something of an ironic twist, the popularity of this character has impacted real military training. Recruits often enter with at least a passing familiarity with the trope and don't take it (or the instructor) seriously.

This often spills into works that depict normal life in the military, more often than not, a higher ranking officer or NCO will randomly scream at the low private and punish him with push-ups or a random exercise. This tacticnote known as getting smoked ("beasted", in British Army slang) is unrealistic as most of the US Armed Forces branches have banned this practice outside basic training and the Officer/NCO themselves would get a far worse punishment for having ordered the punishment.

A very specific example of The Neidermeyer that, unlike that trope, will seldom lead his men into actual combat, because his job is to train them, then send them on to their next assignment. Compare Sergeant Rock, the guy who leads them once Drill Sergeant Nasty is done training them.

The Drill Sergeant Nasty is one of the best examples of the Genghis Gambit. It instantly provides 40 people who have nothing in common with one unifying dream, namely the sergeant's slow, painful and embarrassing death.

Unlike other examples, however, Young insists on going into combat with the men, despite his CO offering to pay him off.
Young: Sir! With respect, you can stick the money up your arse that's all I can offer you, sir. I love what I do, I also love these grubby, thickheaded men I trained — you most of all and I expect to be with them and with you because I'm needed.