Fanfic / Keepers of the Elements 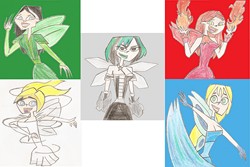 that can be read here

In this story, ever since around the 12th Century, five girls, called "Keepers" are chosen to manipulate the Five Elements: Water, Fire, Earth, Air and Energy. Since then it has been going down the lines until the responsibility falls on five of the Total Drama girls, Bridgette, Izzy, Heather, Lindsay and Gwen. Problem? There's an evil immortal wizard named Radcliffe who wants to get rid of them and thus be able to take over all of existence. Their trainers Marissa, Aideen, Deanna, Akari and Vesta respectively are going to have quite the handful!

If you think this premise is familiar, it probably is.

Now with a sequel!

This story shows examples of: