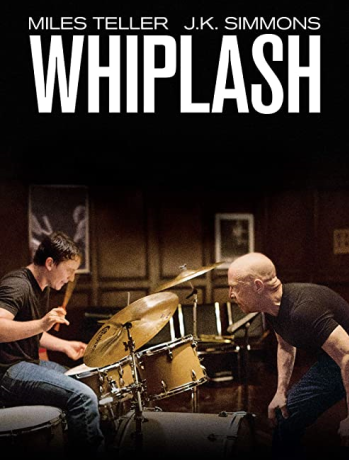 The road to greatness can take you to the edge.
"There are no two words in the English language more harmful than 'good job'."
— Terence Fletcher
Advertisement:

Whiplash is a 2014 psychological drama written and directed by Damien Chazelle, and starring Miles Teller as Andrew Neiman, a young jazz drummer with aspirations of becoming one of the great musicians.

Attending the country's greatest music school, New York City's Shaffer Conservatory, Neiman finds himself on the radar of music conductor Terence Fletcher (J. K. Simmons), head of the top-tier band. Seeking to train under Fletcher and become a jazz legend, Neiman manages to impress him and enter the ranks. However, he soon learns that Fletcher's methods of teaching prove vicious in their perfectionism, willing to stop at nothing to push students past the limits expected of them to earn his approval.

A now-famous sequence from the original script was converted into an 18-minute short film starring Johnny Simmons as Andrew and J. K. Simmons as Fletcher to secure the film's production. Upon debut at the 2013 Sundance Film Festival, it received mass acclaim and won the short film Jury Award for fiction, convincing investors (including Jason Reitman) to produce the whole film. Miles Teller replaced Johnny Simmons while the other Simmons remained as Fletcher.

The next year, Chazelle returned to Sundance with the feature version, which played to rapturous reception, winning the Grand Jury Prize for Dramatic Features. It later opened up in theaters in October of the same year, earning mass acclaim on a wider scale, alongside 3 Oscars for Best Supporting Actor (J. K. Simmons), Best Film Editing and Best Sound Mixing. The film was also nominated for Best Picture and Best Adapted Screenplay.

Also, it's a film that really loves music.

This page and tropes are not quite my tempo. Get the fuck out of my indexes before I demolish you!
Feedback

Neiman powers through a long night of verbal abuse and bloody hands to land a spot in Fletcher's lineup.

Neiman powers through a long night of verbal abuse and bloody hands to land a spot in Fletcher's lineup.