Footsie Under the Table 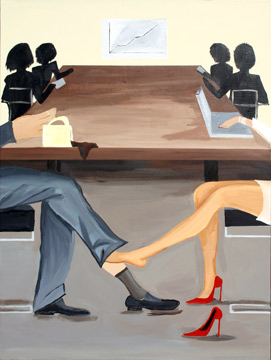 Bob and Alice are eating together or sitting in the same boardroom for a business conference or something. Alice is in a playful mood, or she's of a mind to seduce Bob. At the same time, she doesn't want her intentions to be too obvious to the other people present, and verbally expressing herself directly to Bob is out of the question and/or would be inappropriate for the occasion. Bob and Alice are sitting directly across from each other at the table and this gives Alice the perfect opportunity.

Underneath the table, away from the eyes of others, she slips off one or both of her shoes and, using her feet, caresses Bob's legs. If she's feeling really adventurous, she'll go higher. Above the table, she can look nonchalant or indifferent so as to not arouse suspicion, or she can have a coy little smile as she watches Bob's reaction to her hidden antics, whether he's embarrassed or enjoying the attention she's giving him.

In fiction, this trope is usually invoked by a woman toward a man in order to express physical attraction that cannot otherwise be expressed for one reason or another; but the reverse (man to woman) is also possible. The Ho Yay and Les Yay versions of this trope are not unheard of, either.

In these cases, the recipient's reaction/response may vary. They may be flustered or embarrassed, or may like the attention and even reciprocate. Alternately, they may pull away to show a lack of interest or, in extreme cases, make a move to stand up—if the instigator doesn't get kicked for their trouble.

Often it's a very specific type of Fetish. When done in fictional settings, it's done for Author Appeal or Fanservice. If the perpetrator is a woman, it's sometimes done to emphasize that her legs.

It can also be done for comedic purposes, if the perpetrator ends up "serving" the wrong person underneath the table. In such a case, when the mistake is discovered, expect hilarity to ensue.

Compare Naughty Under the Table.

Not related to Does Not Like Shoes, Fertile Feet, or Foot Popping.