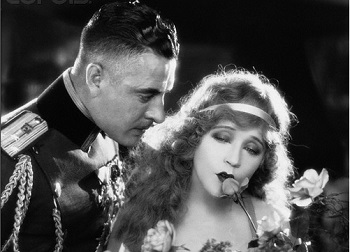 The Merry Widow is a 1925 romantic drama starring John Gilbert and Mae Murray and directed by Erich von Stroheim.

Crown Prince Mirko of Monteblanco and his cousin and second-in-line to the throne Prince Danilo Petrovich (Gilbert) stop at an inn along with their traveling party. Also stopping at the inn is the "Manhattan Follies", a traveling theatrical troupe starring dancer Sally O'Hara (Murray). Everybody is drawn to the lovely Sally—Prince Mirko, Prince Danilo, and Baron Sadoja, the richest man in Monteblanco. The thoroughly evil Prince Mirko just wants sex with Sally, and Danilo for his part is almost as predatory, but after Sally recoils when Danilo sets her up for a tryst, he has an attack of conscience. Soon enough they fall in love and Danilo wants to marry Sally. However, the King forbids it. A heartbroken Sally settles for Baron Sadoja, and when he croaks, she inherits all his money and becomes the Merry Widow. This inspires the slimy Mirko to marry her and bring her fortune back into the country. Soon Mirko, Danilo, and Sally all meet again in Paris, and complications ensue.

Like every other film Erich von Stroheim ever directed, The Merry Widow was a Troubled Production. Stroheim clashed with MGM, which actually went so far as to offer him a cash bonus to finish the film on time, only for Stroheim to ignore the studio and go over budget as usual. The studio also forced von Stroheim to adopt a Happy Ending that he hated. Additionally, Stroheim clashed with Mae Murray, as Stroheim hated using established stars and Murray hated the overt sexuality of Stroheim's movie. Despite all of this, The Merry Widow became by far von Stroheim's biggest commercial hit, and helped establish John Gilbert as one of the biggest stars in Hollywood.

Loosely based on the famous 1905 opera by Franz Lehár, which was later loosely adapted into a 1934 musical directed by Ernst Lubitsch. While both films take major liberties with the plot of the opera, this film further departs from the source by being a romantic drama as opposed to a light comedy. Two future huge movie stars, Joan Crawford and Clark Gable, were both extras in the ballroom dancing scene.