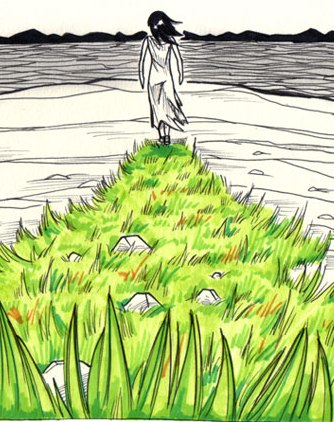 There are a lot of ways to tell the White Hats from the Black Hats, but one pretty good rule of (green) thumb is that anyone who can bring flowers into existence just by stepping on soil is probably not evil. This person is not just a Friend to All Living Things but a potent force for good who is very likely a Messianic Archetype, or a Physical God or credible runner-up. At the very least, they have a Green Thumb, and in extreme cases are so powerful and so Good that their aura bleeds out into the world as a source of healing and growth.

The symbolism is pretty direct: person is so good and saintly that their presence actively manifests as natural beauty.

This trope can be subverted by switching flowers to thorns. The inverse is Walking Wasteland, where a character's presence causes withering and decay; see also Enemy to All Living Things. The character might not necessarily be bad, but that's a hard case to sell. Villains and neutral characters doing this are usually employing power over plants, possibly from being a Nature Spirit or Plant Person. This is also a halmark trait of a Fertility God.

The obvious Foil to Walking Wasteland or Evil Is Deathly Cold. Indeed, sometimes it can be impossible to tell whether the effect is the character's beneficence, or because their defeat of the Big Bad removes his influence, which has No Ontological Inertia. (Babies Ever After may act as a mundane equivalent, or coincide with this trope.) See also Hope Sprouts Eternal and World-Healing Wave. Contrast Cross-Melting Aura.

Not related to the giant Aurgelmir in Norse Mythology, whose feet mated with one another and gave him the son Thrudgelmir, the first of the frost giants.