Fold the Page, Fold the Space 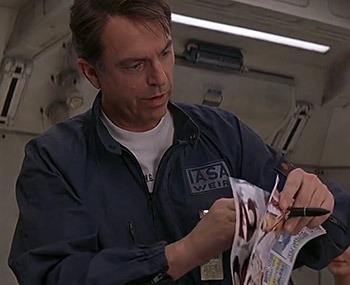 Einstein-Rosen Bridges made easy.
"Look," said Ford, "I'll show you." He grabbed a napkin off the table and fumbled with it. "Look," he said again, "imagine this napkin, right, as the temporal Universe, right? And this spoon as a transactional mode in the matter curve." It took him a while to say this last part, and Arthur hated to interrupt him. "That's the spoon I was eating with," he said.
— The Restaurant at the End of the Universe
Advertisement:

A character explains Time Travel, Faster-Than-Light Travel, Teleportation, or wormholes by folding a sheet of paper (or something similar) in half to illustrate the theory of an Einstein-Rosen Bridge. Usually they indicate two points at opposite ends of the sheet, then fold the sheet so that the points touch. If they really want to get their audience's attention, they might create their metaphorical wormhole by stabbing a pen through the two points.

Truth in Television: the piece of paper explanation has become so ubiquitous that it turns up in many real-world scientific explanations of wormholes and space/time.

Sub-Trope of Layman's Terms and Phlebotinum Analogy. See also Currency Conspiracy, where folding a dollar bill can be used as "proof" of The Conspiracy.

Mr. Clarke explains the Upside-Down to his students... at a funeral.

Mr. Clarke explains the Upside-Down to his students... at a funeral.