Our Wormholes Are Different 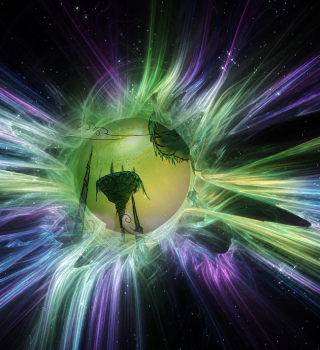 A Lorentzian wormhole topology held open by exotic matter with negative energy density. Or something.
Advertisement:

In reality, wormholes are purely a scientific conjecture, a consequence of the same equations that describe black holes. There's no way that we can conceive of to get to one or use it for anything. In fiction, however, wormholes are a Swirly Energy Thingy that can be used as a convenient means of travel from one place to another.

The most common use is for FTL Travel. By extension, if they show up often enough and consistently enough, they can become nodes in an interstellar Portal Network. They can also enable Time Travel, provide a mechanism for FTL Radio, act as doorways to Alternate Universes, or any/all of the above. No matter what Technobabble is thrown around, rarely will any two authors treat them in precisely the same manner, which is why Our Wormholes Are Different.

Related to Negative Space Wedgie. Compare: Our Time Travel Is Different, which this may sometimes overlap. See also Swirly Energy Thingy. Compare Unrealistic Black Hole. Often explained in Layman's Terms via Fold the Page, Fold the Space. See Powered by a Black Hole for a relatively more realistic way a black hole can be used.