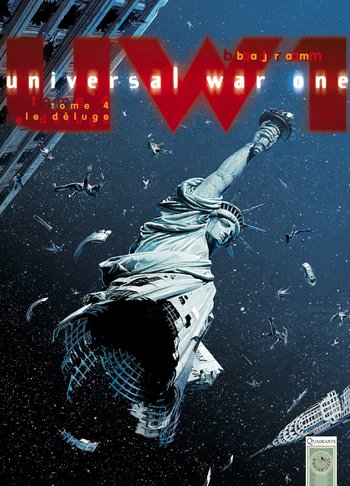 Universal War One is a six-part French comic book limited series written, penciled, and inked by Denis Bajram. The first issue, The Genesis, was initially published in France by Soleil Productions in 1998. Due to its popularity, it was translated and released in English by Marvel Comics. The genre is military science fiction, and the series deals with such ideas as time dilation and time travel.

2098 - There is a growing tension between the United Earthes Forces (a NATO-like organisation) and the wealthy corporations known as the CIC: Colonisation Industrial Companies. But, suddenly, THE WALL appeared, cuting the solar system in two. This wall is so big, so dark, so mysterious. A squadron of officers waiting for martial court must understand its secrets. At any cost.

The whole plot was crafted by Bajram beforhand, thus leaving no inconsistancy between the six books despite the time travel used by the heroes.

More information can be found here.