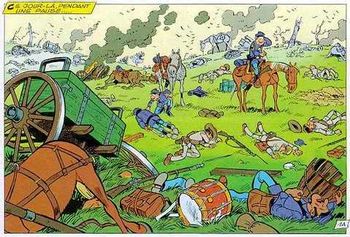 Sergeant Chesterfield (on horseback) and Corporal Blutch (dismounted) after a battle.
Advertisement:

Les Tuniques Bleues (The Bluecoats, 1968-) is a Belgian French-language comic set during The American Civil War. It follows the adventures of two soldiers, the brave but dim-witted Sergeant Cornelius Chesterfield, and his sidekick, the cowardly but clever Corporal Blutch. Unlike Sgt. Chesterfield, Blutch is not particularly keen on the war, and is mainly interested in getting through it alive. This results in no end of bickering between the two, and Chesterfield often dragging Blutch to battle at gunpoint.

The strips have begun to be translated into English; one collection came out under the title of The Blue Tunics, but after the publisher folded, Cinebook continued with the title The Bluecoats.