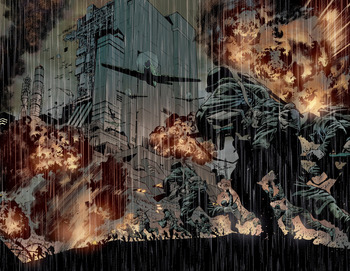 An index featuring comics of all kinds with a heavy focus on or strongly featuring military, warfare and Military and Warfare Tropes.

Most war comics, by weight, are set in World War II. This leads to the occasional misconception that most of them were actually created in the 1940s, when in fact the classics of the genre date from the 1950s and 1960s (by which point many veterans of WW2 were firmly ensconced in their post-war comics careers).