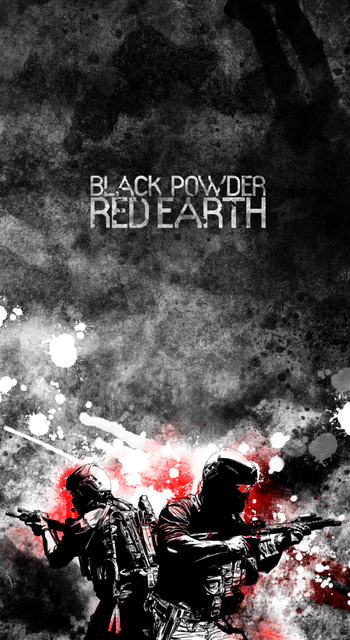 "History is done with Appomattox moments." - Mark Bowden
In the decade following the invasion of Iraq, Private Military Companies become the preferred instrument of foreign policy by Petro-Monarchies in the failed states of the Middle East.
Staffed with former SOF combat veterans, Cold Harbor selects, trains and leads armies of local nationals in conventional and unconventional warfare operations.
With access and placement to these resource-rich conflict zones, PMCs can serve multiple clients at once with overlapping objectives addressing the needs of private enterprise as well as Western Governments.
Advertisement:
Combat actions conducted by the PMC are not considered acts of war...
They are matters of foreign internal defense.

is a Military And Warfare Graphic Novel series written by Jon Chang and illustrated by Josh Taylor. Set 20 Minutes into the Future in an alternate history where Iraq splintered after the US withdrawl, the story follows Cold Harbor, an American PMC, as it conducts operations within the Middle East on behalf of its clients.

Series 03: Yemen is a prequel, set months before the events of Iraq. Cold Harbor operators are on the ground in Yemen, guarding American corporate interests in the Yemeni oilfields, but Cold Harbor leadership have their eyes on a more ambitious aim: to enter the big leagues, conducting unconventional warfare operations on behalf of nation-state players, and they're going to show their chops by rolling up Yemeni terror cells.

Series 04: Awbari, is presently in development, shifting the focus from the Middle East to North Africa, where Cold Harbor finds itself on contract to assist the nation of Awbari rebuild its security forces in the wake of a violent revolution and civil war.

In addition to the graphic novels, a companion turn-based tactical videogame

by Echelon Software is in Early Access on PC and being developed for future release on iOS platforms.