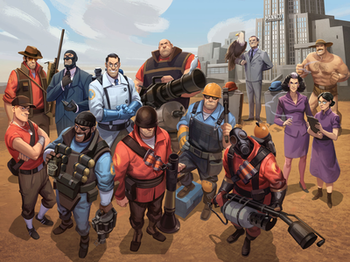 "TF2 didn't start with a lot of story. There wasn't room for one. But as the updates got more ambitious, we found the perfect way to explore the mercs' world: comics."
— The TF2 Team
Advertisement:

Starting with the WAR! comic, Team Fortress 2 established a series of webcomics that primarily explain the story and introduce characters that the actual game itself lacks. Because of this, the comics are usually the only canon material to rely on. The comics have had a major influence on how the game and characters are perceived, rivaled only by the meet the team videos.

While most of the comics are there to give a major update (such as the Scream Fortress events) some backstory, there have been comics which do not tie into any update. In particular, the series has a currently ongoing seven-issue story arc known as Team Fortress Comics, which is bi-monthly... except that only six issues have been released since August 28, 2013.

All of the TF2 Comics can be found here

on the TF2 website. Comics are ordered by release date. This list does not include fanmade update comics, which can be found on their respective update page.

A Fate Worse than Chess

Team Fortress Comics # 6: The Naked And The Dead

It's just how he looks when he smiles.

Example of:
Face of a Thug

It's just how he looks when he smiles.