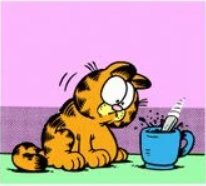 Now that's good coffee!
You got some kind of potion/brew/chili/what have you and you need to show that it is extremely strong; what to do? Well, the stirring spoon looks normal, until you take it out and discover that it has physically deformed, if not dissolved altogether, due to contact with the mysterious substance.
Advertisement:

Do not confuse with a character eating the spoon, that's Extreme Omnivore (or Metal Muncher if the spoon is specifically made of metal).