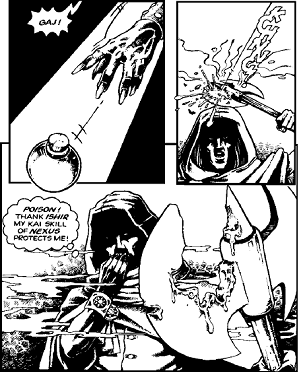 "For External Use Only"
— Description of the Poison Vial, Enter the Gungeon
Advertisement:

A fairly common trope, where any particularly potent poison is incredibly corrosive as well. This is often used to let a hero identify an attack as poisonous without actually getting poisoned. Alternatively, it can be used to show just how strong a poison is (somehow) by having it dissolve the spoon being used to mix it.

Frequently bundled into a single damage type in games featuring Elemental Powers to explain how can it deal damage to both living creatures and constructs or The Undead.

Note that this may be justified (or Hand Waved) in non-contemporary or fantasy works, as the characters might not understand that there even is a difference between acid and poison, or might not have a word for acid, or something. (Incidentally, not all acids are corrosive and substances on the other end of the pH spectrum, bases, can be dangerously corrosive as well.)

Obviously, any liquid that is normally that corrosive will be toxic to ingest. This trope is for the case when a liquid billed as a straight toxin is inexplicably reactive.