Film / Curse of the Golden Flower 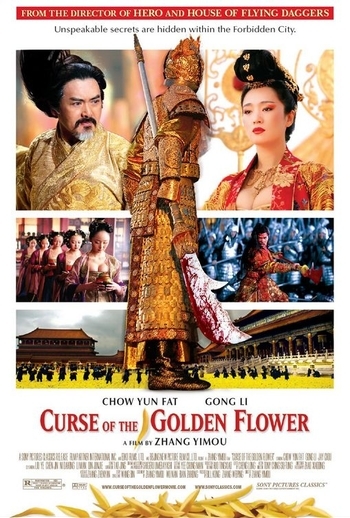 A 2006 Chinese film directed by Zhang Yimou, Curse of the Golden Flower follows the imperial family in the Forbidden City and the various wheels within wheels they have going against each other.

Near the end of the Tang dynasty, The Emperor has been away at war for three years, along with his second son, Prince Jai (Jay Chou). They return to the Forbidden City as the Chrysanthemum Festival approaches, and soon plots, old secrets, and family dynamics all come out of the woodwork. The emperor is thinking of naming a new successor. The crown prince, Wan, is having an affair with his stepmother and the imperial doctor's daughter. The doctor's daughter, Chan, has been adding a new ingredient to the empress's medicine. The empress, believed to be suffering from anemia for years, is suddenly getting much worse. Not to mention she has taken on a mountain of embroidery that she insists must be finished in time for the festival. And no one pays any attention to the youngest prince, Yu.

As secrets start to be revealed, Jai finds that he must choose between his parents. If he will remain steadfastly loyal to his all-powerful father and emperor, or if he will honor the wishes of his beloved and powerless mother.

The film is notable for its exquisite use of color, Mind Screw inducing visuals and epic battles, as well as Chow Yun-fat and Gong Li starring as the royal couple. It managed to pick up an Academy Award nomination (for costuming). It's also one of the few Chinese films to use a visual metaphor for the Tiananmen Square uprising and get away with it. It is often compared with Legend of the Black Scorpion.