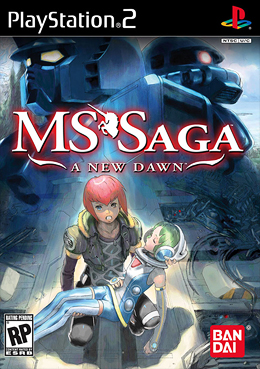 MS Saga: A New Dawn, also known by its Japanese title Gundam: True Odyssey The Legend of the Lost G, is a 2005 PlayStation 2 (released in 2006 in North America) RPG loosely based on the long-running Gundam franchise. An odd duck by any standard, MS Saga places the iconic Humongous Mecha of the Gundam franchise in an entirely new setting and plot, effectively creating an(other) Alternate Universe to add to the Gundam menagerie. The result is predictably Troperiffic, cheerfully combining standard JRPG tropes with standard Gundam tropes into something of a Cliché Storm that may none the less be a Guilty Pleasure for fans of either (or especially both).

As a departure from most Gundam video games (which tend to be either arcade-style Action Games a la the Gundam Vs Series or Turn-Based Strategy in the vein of SD Gundam G Generation), MS Saga is a turn based Role-Playing Game in the style of the Final Fantasy or Dragon Quest. The player controls a party of characters each piloting a mobile suit; as they fight, the characters gain levels (which increases their stats and expands the pool of more powerful "boost attacks" and useful "techniques" that they can perform), while the mecha can be equipped with various combination of weaponry via a Grid Inventory system. In a hanger with proper facilities, mecha can be upgraded and otherwise modified — parts from many different mecha can be combined to form one new machine in a robotic form of Mix-and-Match Critters (incidentally mirroring the Real Life practice of combining multiple model kits into a single, new unit, a process known as "kitbashing"). Of course, you can always just switch wholesale to a shiny new mecha once you get your mitts on one. This multi-tiered system, with the linearly-developing Character Levels of most JRPGs applying to the pilots and the less restricted Character Customization more typical of Western RPGs applying to the mecha, can lead to the construction of absurdly-customized parties.

Note that this effort will not be wasted; MS Saga can reach Nintendo Hard levels even during normal gameplay. Additional extras, including Bonus Dungeons, Bonus Bosses, Boss in Mook Clothing battles, Tournament Arc Sidequests, and more are added at nearly all points in the game. Thankfully, these are generally optional, and in fact sometimes become inaccessible without their existence ever really being hinted at. Getting true 100% Completion is an impressive feat.

The initial plot is that two boys, Tristan and Fritz, want to get revenge on the mobile suits that destroyed the orphanage where they grew up at, with the plot getting much darker as the story progresses.

MS Saga incorporates mecha primarily from the Universal Century Gundam timeline, specifically from Mobile Suit Gundam to Char's Counterattack, but includes weapons and equipment from everything through to Victory Gundam (aside from Gundam Unicorn, which was released after the game came out). Mecha and equipment from Gundam Wing and G Gundam also appear, though primarily as rewards for beating the aforementioned optional content.