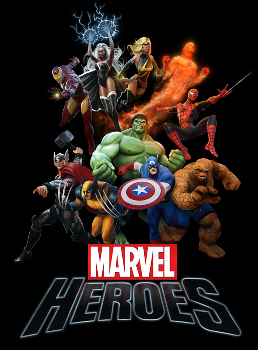 Marvel Heroes (formerly known as Marvel Universe Online, and later rebranded Marvel Heroes 2015, Marvel Heroes 2016, and finally Marvel Heroes Omega) was the House of Ideas' renewed attempt to enter the MMORPG fray, developed by Gazillion Entertainment (also in charge of the kid-friendly Super Hero Squad Online). A previous effort under development was scrapped at the eleventh hour, and became what is now known as Champions Online.

The basic storyline, written by famed Marvel scribe Brian Michael Bendis, in summary: Doctor Doom obtains the Cosmic Cube, and wants to harness its power and conquer the world. He does so while forming alliances with various other villainous factions, such as HYDRA and Mr. Sinister. All the heroes in the Marvel Universe, from street levellers to cosmic entities, must band together to stop Doom and his legion from unleashing a catastrophe.

This free-to-play game was spearheaded by Diablo I & II co-creator David Brevik, and his influence on the gameplay shows. Marvel Heroes can be more accurately described as Diablo in an MMO setting, utilising the Marvel Ultimate Alliance concept of a rotating roster of heroes the player can choose from in their playthroughs. Once Brevik left, the game shifted to a slower and more deliberate Diablo III style of play.

Unlike many other titles, however, players used existing Marvel superheroes instead of creating a character from scratch. Each hero was essentially translated into a mix of one or more classic Fantasy Character Classes, much like Mages, Thieves or, well, Rogues in other games.

Each hero had different levels in 6 statistics (based on the Marvel Power Grid), which can increase with the use of gear and when they level up:

Gazillion had incorporated a range of locales and classic storylines. A huge selection of heroes (there are over 8000 characters in the Marvel universe) were playable, from classic favourites like Iron Man to more offbeat picks such as Squirrel Girl and her army of rodents. Customisation of heroes came in the form of different costumes, stat enhancements and swappable powers to differentiate, say, one player's Hulk from another's. Team ups (secondary characters who acted automatically) were also encouraged, allowing players to either re-enact classic comic book squads or create hilariously unlikely hero combinations (including a hero teaming up with him/herself).

Marvel Heroes launched in late May 2013 for those who pre-ordered the premium and ultimate packs, and officially released on June 4th, 2013. Updates to the game came in 2014, 2015, and 2016, with the 2015 update removing Windows XP support, and console versions were released in June 2017.

that the game was going to be closed on December 31st. A week after that, former Gazillion employees said that they'd actually lost the Marvel license on October 23rd, they'd all been let go on the day before Thanksgiving, and it was going to be closed that Friday, November 24th. In the end, it turned out to be neither of those dates, and the game became a Defunct Online Video Game without fanfare on Monday, November 27th, at 10:30 am PST, and the MH website shut down (taking years of forum posts down with it) shortly thereafter. (And two and a half hours after that, Gazillion announced that the game would be closing that day.)