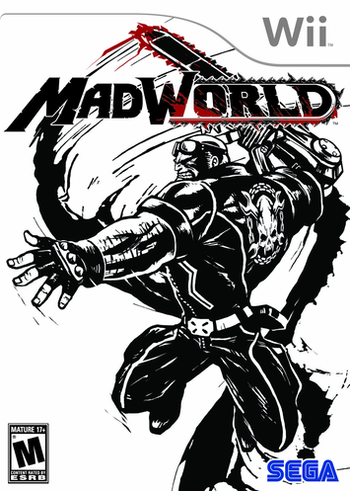 Jack, Jack
He's a psycho maniac
That's right, it's death on sight
It don't matter who's wrong or right
"It's a Mad, Mad World, and you caught in the game.
You put yo' life on the line, I put a HOLE IN YO' BRAIN!"
Advertisement:

This Comic Book-style tale (published by Sega) follows Jack Cayman, a chainsaw-wielding contestant in the world's goriest game show: Death Watch. Contestants, with sponsors, compete in a vicious bloodbath to see who will emerge as the victor. The show has temporarily taken over a Manhattan-like metropolis island, leaving authorities in a panic. Jack is one of the contestants under the hand of sponsor "XIII," and his boss has high hopes for him. There's more to Jack than there appears on the surface, however...

A notable feature is the game's distinctive graphical style, which utilizes cel-shading and features only three colors (black for shadows, white for anything that's not shadowed, and red for the tons and tons of blood). This game was the first title made by PlatinumGames, which includes some of the developers from the now-defunct Clover Studio, creators of Viewtiful Joe, Ōkami, and God Hand. The game was written by Yasumi Matsuno, of Final Fantasy Tactics and Vagrant Story fame, along side Ken Pontac and Warren Graff (of Happy Tree Friends fame) and JP Kellams (Platinum's American Producer from its founding until 2015.)

A game was released for the PlayStation 3 and Xbox 360, called Anarchy Reigns (Max Anarchy in Japan), featuring Jack and a few other characters from this game, in which they show their true colors.