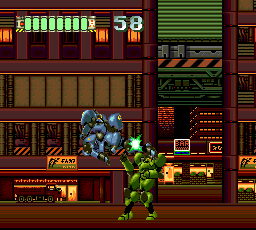 Mad Stalker: Full Metal Force is a mecha beat 'em up game developed by Fill-in Café (the same folks behind Asuka 120% Burning Fest. series and Panzer Bandit) and published by FamilySoft that never left the shores of Japan. It was released in 1994 for the Sharp X68000.

Set in the not-so-distant-future in the year 2142 A.D., when disasters were a thing of the past for Artemis City. An old warship from an older war was discovered containing hundreds of giant mechas known as Slave Gears, which were put under control with the intent of ruling the government with power. Two of the Slave Gears models, named "Hound Dog" and "Rising Dog", were taken for experimental purposes under the police's management. However, the main computer of the warship "Omega" suddenly began functioning, hacking all military network channels, ceasing all functionality of Artemis City, and terrorizing the city with Rising Dog under its control. With Artemis City in danger, the police began operations by sending in Hound Dog to fight the rampaging Slave Gears and stop Omega.

The game featured a unique approach to beat 'em up genre, as you control Hound Dog through a single 2D plane while fighting other mechas akin to a Fighting Game such as Street Fighter, using two attack buttons of different strengths and speed as well as special attacks and throws. Once you reached the boss at the end of each stage, the game goes from a single plane brawler to a straight-up 1-on-1 fighting game. The game spans six stages of increasing difficulty and also features a VS. Mode where two players can duke it with the Slave Gear of their choice in traditional fighting game fashion against another player or the computer. The music for the game was composed by Keishi Yonao, whose resume includes Asuka 120% Burning Fest., Dies irae ~Also sprach Zarathustra~, Strania -The Stella Machina-, among others.

Mad Stalker was later ported to the FM Towns in July of 1994 with updated visuals and an arranged soundtrack. Another port was released for PC Engine CD in September of the same year (published by NEC), with the enhancements of the FM Towns version along with animated cut-scenes that gave the game much more narrative and two more playable characters. A remake was made by the same team for the PlayStation in 1997, later re-released via PlayStation Network in 2011. A Mega Drive version was in development alongside the Sharp X68000 version in 1993 by Kagado Studios, but due to the increase of Mega Drive manufacturing costs, it was unfortunately canceled. In 2020, Opera House, Co. bought out the software rights of Fill-in-Café's back catalog of video games, and with Columbus Circle as the publisher and the supervision of the Mad Stalker's main programmer Masatoshi Imaizumi, the Mega Drive version was finally released on September 17, 2020 as a limited physical release.