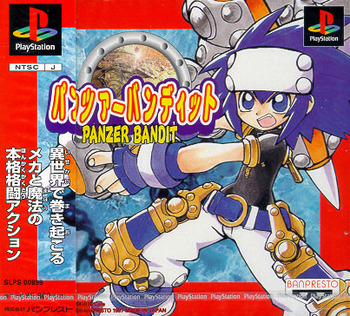 Panzer Bandit is a 1997 Japan-only Beat 'em Up developed by Fill-in Café and published by Banpresto for the PlayStation. The game is a mix of 2D sprites with 3D backgrounds, with sprite-based characters running in a 2.5D environment. The game plays similarly to Treasure's Guardian Heroes, except with only two planes of movement to jump back and forth from. Each character has three basic attack options: two melee attacks and one energy draining special. There are special moves done with button combinations, as well as powerful Hyper Attacks, both of which cost energy as well (which is recovered by racking up big combos).

Set on the land of "Canadyne", a world where Steam technology and magic coexists, there are legends of a huge Floating Continent somewhere in the skies known as the Skyship "Arc", said to hold inmense treasures and the wisdom of an ancient civilization. The key to this place lies in another piece of ancient technology: "Syncs", special machines capable of creating a psychic bond with humans. Professor Crone has been a leading researcher in Sync technology, but support for his investigation is pulled by Sir Golden, the head of the Golden Foundation, after being sweet-talked by Crone's bitter rival Dr. Farado into searching for the secrets inside Arc instead. Crone calls them out on this betrayal, but Golden's determined to gain even more power and fortune, whereas Farado is intent on solving the mysteries of Arc and rub them on his rival's face.

The Golden Foundation then makes their move to steal 4 mysterious tablets recently unhearted that appear to be connected to Arc, assaulting each area with an army of Mecha-Mooks. Crone gathers a 4-man team consisting of Kid Hero Kou, his granddaughter Kasumi, young frontier priestess Miu and Sync-turned-combat android Ein in order to stop the Foundation and Farado's ambitions.

The game was re-released in 2011 via Play Station Network in Japan, this time published by Bandai Namco Entertainment. Not to be mistaken for Panzer Dragoon.