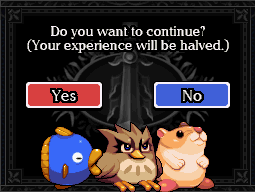 You're out for the count. You exhausted your last life or last ounce of energy and your character is done. Game Over, dude. Have a Nice Death! No problem, you'll just continue and try again, right? Not quite! The challenge is beefed up even more and the game is even harder than it was before you were defeated, whether it is starting without power ups or the like. This trope usually applies to games that use a health bar system or life count. If this gets bad enough, the only way to beat the game might be to start all over and do it without a game over.

Despite the high cost, this is still an example of Death Is Cheap in games where loss equals death, since it means that returning from the dead is nearly guaranteed despite its disadvantages.

This is a sub-trope of Death as Game Mechanic, which covers all sorts of changes and affects death can have on gameplay beyond making the game harder or undoing your progress. The opposite of Death Is a Slap on the Wrist and Mercy Mode. Contrast Anti-Frustration Features, where dying makes the game lower the difficulty for you. If continuing takes you back to a much earlier part of the level or game, that's Checkpoint Starvation. This trope is a frequent cause of an Unstable Equilibrium, since it's a mechanic that inherently makes the game progressively harder when you're already doing badly.