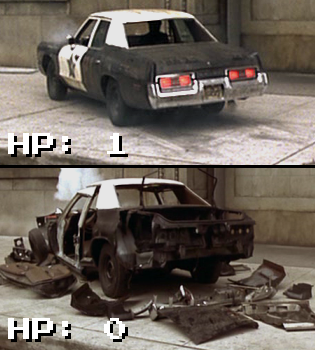 Fuck, all I did was bump the building!
"It doesn't matter how much health you have. It's just... Are you dead yet? Are you dead or are you alive? If you are alive, continue fighting. If you are dead, retry."
— Kung-Fu Jesus; Let's Play God Hand [1]

Video game characters on average are incredibly tough. No matter how much you get hurt or what it is that's doing the damage, the worst you'll show for it is blood decals on your suit. You laugh as Universal Poison does five points of damage per step, you shrug off the flying chainsaw robots using your blood to make abstract art like nothing, and you're perfectly fine as long as you have at least one Hit Point left. However, if something removes that last point, even if it was an apple falling on your head (or perhaps multiple cherries), it will cause you to experience Critical Existence Failure and keel over like you had a sudden inexplicable heart attack.

Those subject to this seem to be held together more by their life force than anything tangible, as the act of dying instantly makes them as durable as wet tissue paper in a blender.

Most of this is a function of fair gameplay, especially in fighting games where making a character weaker over time would just make them progressively more vulnerable and susceptible to damage. This trope enables comeback victories which are more dramatic than one side holding the advantage for an entire game, and avoids a situation where an early setback makes it pointless to keep trying because defeat is assured. Of course, this same trope is what makes Cherry Tapping both viable to use and humiliating to have done to you. CEF also allows certain tactics that would be downright crazy in Real Life to work in the game (e.g. using explosions for a makeshift Rocket Jump because you have enough HP to survive the explosion, bunny-hopping to reduce total damage taken, or running into suppressing fire to either act as a shield for the guys behind you or just get close enough to use a One-Hit Kill weapon). Furthermore, when each unit can keep attacking at full effectiveness until its HP hits zero, a team of players (or a single player controlling multiple units) is incentivized to focus all attacks on one enemy at a time in order to quickly reduce the enemy team's damage-dealing potential. In real life situations such as fighter plane and tank battles, it’s normally more efficient for each vehicle to engage a different enemy to avoid wasting munitions on overkill, and destroy (or almost as good, disable) more enemies more quickly.

This could have a flimsy justification for armoured vehicles — anything which doesn't penetrate its armour arguably would not adversely affect its performance. (The same principle also applies to Deflector Shields.) However, because of the simplified nature of damage calculations, it's entirely possible for, say, an armored vehicle to sustain an anti-tank missile to its thinly-armored back and still keep fighting with a few Hit Points remaining, when in Real Life it would easily cripple the vehicle and/or kill the occupants in the process.

Critical Annoyance often indicates the imminence of this trope, much to the irritation of the player's eyes and/or ears.

If Critical Existence Failure is always a danger, regardless of the attack, the character is a One-Hit-Point Wonder. On the other hand, if it doesn't occur immediately upon zero Hit Points, but waits for just one more hit to land, then the owner possesses a Last Chance Hit Point.

Has some overlap with Death of a Thousand Cuts, Heroic RRoD and No Kill Like Overkill, since any attack that inflicts even Scratch Damage can ultimately land a KO.

Compare Exact Time to Failure and Instant Cooldown, for more general examples of unrealistically sudden transitions from "perfectly OK" to "totally dead"; No Ontological Inertia; and Strong Flesh, Weak Steel. Contrast the Chunky Salsa Rule; Didn't Need Those Anyway!; Full Health Bonus; and Subsystem Damage, where losing Hit Points does adversely affect the owner's ability to fight back. See also Attack! Attack! Attack!, which this trope can encourage or at least give the appearance of; and The Last Straw, when a proverbial straw breaks the camel's back. If something is damaged and changes to look the part but otherwise behaves or functions the same, you're looking at Shows Damage. Although named similarly, is not related to Critical Research Failure.

If you are looking for the trope about having one's existence entirely erased from the time-space continuum, try Ret-Gone. Despite the title, someone doesn't have to literally suffer from this to be an example of Suspect Existence Failure.

Like every other Blade Strangers fighter, Curly will continue to move and fight without any handicaps regardless of her current health: even after suffering a full combo while already at low HP, she will still get up and jump around as if she was in perfect condition. However, hitting the robot girl with a simple slap to the face after all of this will cause her to experience sudden Critical Existence Failure and immediately knock her out.

Like every other Blade Strangers fighter, Curly will continue to move and fight without any handicaps regardless of her current health: even after suffering a full combo while already at low HP, she will still get up and jump around as if she was in perfect condition. However, hitting the robot girl with a simple slap to the face after all of this will cause her to experience sudden Critical Existence Failure and immediately knock her out.