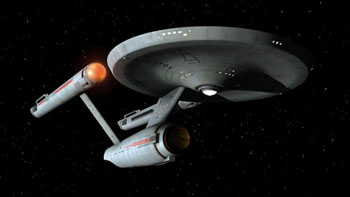 These are the voyages...
Space: the final frontier...
Advertisement:

is a long-running science-fiction franchise with ten television series (seven live-action shows and three animated series), and thirteen live-action movies spanning three generations of characters and over six decades of television. And it's still going with a couple of new additions in development.

The setting in every series is sometime in the distant future featuring a collection of broadly similar rubber-foreheaded polities spanning (fairly small) segments of the so-called 'quadrants' of the Milky Way galaxy, with the stories centered around an Earth-based interstellar government called the United Federation of Planets and the exploits of its fleet of starships, Starfleet. Every series dealt with a particular crew, mostly of various ships named Enterprise. As originally envisioned by its creator, Gene Roddenberry, the science fiction nature of the series was just a method to address many social issues of the time that could not have been done in a normal drama. As such, it was not above being Anvilicious or engaging in thinly-veiled social satire, but considering its origin during the 60's, sometimes they couldn't afford to be subtle.

It was, for the most part, way on the idealistic side of the Sliding Scale of Idealism vs. Cynicism, at least partially because of its solid allegiance to the Enlightened side of Romanticism Versus Enlightenment. But it still found some sort of balance between a Dystopia and a Crystal Spires and Togas future. In general, it is a future you hope will come true, albeit after humanity endured terrible troubles like the Eugenics Wars led by the genetically enhanced conqueror Khan Noonien Singh, and a third world war, and rose above them. All series have sought to show that while you may think the world is falling apart and there is no chance of global unity, all this crap will eventually work itself out. However, that future will of course still have serious problems like hostile interstellar powers and horrific threats like deadly alien monsters and diseases to deal with; nothing that the cream of Starfleet like Kirk, Picard, Sisko or Janeway's crew can't handle though.

The series has also had a profound impact on modern culture and media. Everyone with any exposure to Western pop culture has heard of the Starship Enterprise, and the series predicted (and possibly inspired) the PC, tablet, automatic doors, cell phones, natural-language AI and more, decades before their invention. The first African-American woman in space was inspired to become an astronaut because of Nichelle Nichols' pioneering role. And the prototype Space Shuttle was named after the iconic starship NCC-1701,note While the Enterprise OV-101 did not fly in space, it did make atmospheric test flights, and was used for numerous other test purposes as is Virgin Galactic's first commercial spacecraft.

And finally, while there were previous antecedents (such as the case of Sherlock Holmes and The Man from U.N.C.L.E.) Star Trek effectively gave rise to Fandom as we know it: when Star Trek: The Original Series began to pick up steam in syndication, fans organized conventions, wrote fanfiction, dressed in costume, and generally made enough noise to keep the franchise going for fifty years and counting. Every fandom since has grown from that original outpouring of fannish activity and devotion.

Original Movie Series
When the Phase II network project died and the insane success of Star Wars made sci-fi films profitable again, Paramount elaborated the series pilot into The Movie, which ultimately led to a whole line of movies.

Movies in the franchise include:

Kelvin Timeline Movies
After the cancellation of Star Trek: Enterprise in 2005, 2006 was the first year with no Star Trek shows or films since 1985. Then, when all seemed lost, Star Trek was revived with a Film of the Series by J. J. Abrams that created an Alternate Timeline with new actors playing the original series characters, kicking off a whole new series of movies:

Invariably (and unofficially) referred to as the "Abramsverse" or "JJverse" among fans since the 2009 film's release, this new continuity was officially named the "Kelvin Timeline" (after the point of divergence in the first movie: that Romulan destroys the USS Kelvin with Kirk's father within, changing the captain's upbringing) shortly before the release of Star Trek Beyond. Also referred to as the "Alternate Reality" by the Star Trek Wiki "Memory Alpha."note Even though the name technically applies to any divergent or separate continuum from one universe This also makes the original continuity referred to as the "Prime Timeline."

Upcoming Movies
December 22, 2023 — Untitled film — Confirmed by Paramount on April 2021. Little is known about the film other than the release date, its attached director (Matt Shakman of WandaVision fame), and the fact that it will be produced by Abrams.

In total, to watch every minute of canon Star Trek would require 23 days and 25 minutes of your time. Of Science Fiction franchises, only Doctor Who and its various canon spinoffs are even within a week, and the Super Sentai franchise, which started later than Star Trek or Doctor Who, but has been running continuously since 1979.

Tropes common across all series:

...To boldly go where no one has gone before!

The main title theme of "Star Trek: Deep Space Nine" was rearranged beginning with the fourth season. At first, there seems to be no difference. However, viewers were in for a surprise, as Deep Space Nine was no longer the derelict space station it was once. Instead, it had become a brimming hub of activity, with new instrumentation bringing a sense of excitement and adventure into theme.

Example of:
Rearrange the Song

The main title theme of "Star Trek: Deep Space Nine" was rearranged beginning with the fourth season. At first, there seems to be no difference. However, viewers were in for a surprise, as Deep Space Nine was no longer the derelict space station it was once. Instead, it had become a brimming hub of activity, with new instrumentation bringing a sense of excitement and adventure into theme.