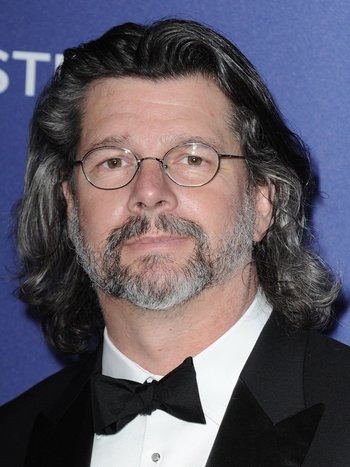 Any resemblance to George Lucas is entirely coincidental.
Advertisement:

Ronald Dowl Moore (b. 5 July 1964) is an award-winning American screenwriter and TV producer, best known for his work in Speculative Fiction, especially on Star Trek: The Next Generation and Deep Space Nine.

Born and raised in Chowchilla, California, Moore majored in political science, initially on a Navy ROTC scholarship at Cornell, but dropped out due to losing interest in his studies. While working odd jobs in the late '80s he toured the Star Trek: The Next Generation set during the filming of "Time Squared" and got the chance to pitch a script to one of Gene Roddenberry's assistants. Executive producer Michael Piller bought the script and hired him; the script ultimately became season three's "The Bonding".

Ron Moore's profile in Star Trek grew over time and he eventually became a co-executive producer on Star Trek: Deep Space Nine. After the wrap, however, he moved over to Star Trek: Voyager, helmed by his friend from TNG Brannon Braga, only to quit three weeks later, penning just two scripts. He later said that the inciting incident was him asking for advice writing B'Elanna Torres and getting a response along the lines of "We don't care, do what you want," confirming his suspicion that the creative team had stopped caring about the show and were just there to draw a paycheck.

After leaving Voyager, Moore set out to create a Military Science Fiction show very much in opposition to what VOY portrayed, which became Battlestar Galactica (2003). Due to a combination of Executive Meddling in the later seasons and admitted Writing by the Seat of Your Pants by Moore, results were somewhat mixed.

Ron Moore and fellow DS9 alum Ira Steven Behr are currently (2014-) co-heading production of Outlander for Starz. He also has an original science fiction streaming series, For All Mankind (distributed by Apple TV+).