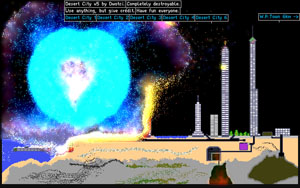 The Powder Toy is a free and open-source sandbox game, in near-constant development since 2008, which features arguably the most advanced physics ever seen in a Falling Sand Game. It currently has 13 categories of elements, many of which contain dozens of unique materials. TPT (as it is abbreviated by fans) simulates, in addition to particles, air movement, heat, electricity, radioactivity, optics, gravity, and nuclear fusion. More information about TPT can be found at the official wiki.

The Powder Toy contains examples of: