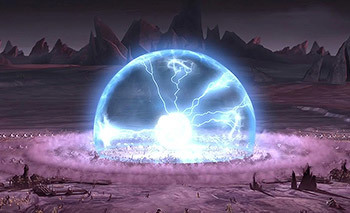 The go-to weapon in case of Robot War. Leaves humans intact... but hopelessly bored.
Grif: What's an E.M.P.?
Washington: It's an electro-magnetic pulse. It wipes out all circuitry and computers it touches. It will destroy the A.I.—
Simmons: Oh, you mean an Emp.
— Red vs. Blue
Advertisement:

EMP, short for electromagnetic pulse, is often used in stories to take out anything electronic. Sometimes shown to be a temporary effect (especially when the Rule of Fun applies in games), it usually results in the permanent disabling of electronic systems.

Now for a more detailed explanation.

When a nuclear warhead explodes, it releases a LOT of gamma rays, which are photons with tons of energy. When these photons travel through air, they strip electrons off the air molecules as they zoom past. This is called "ionizing" the air. Because those photons are so very energetic, they do it over a very long distance and make a huge volume of ionized air.

Ionized air becomes a conductor. This means those stripped-off electrons, energized by the gamma rays, are free to move around in an electric current. Any change in current produces radio waves. And since the current is going from zero to huge in a very short amount of time, this means a large portion of the atmosphere becomes a HUGE radio transmitter, broadcasting noise at full power.

Radio waves have the generally useful property that they induce currents in conductive material (that's how a receiving antenna works). So whenever these INTENSE radio waves hit something metal, like the wires inside your computer, they produce proportionally INTENSE power surges. Ever had a piece of electronics destroyed when lightning hit your house? This is a similar effect, except bigger. And everywhere. At the same time.

As a bonus, the main pulse is followed almost instantly by secondary ones. The original nuke releases neutrons, which run into things and produce more gamma rays, which produce another wave of electrons. And after that, the Earth's magnetic field "heaves" a little when hit by all this stuff, and that magnetic effect can zap anything connected to really long wires.

In particular, silicon transistors — the building block of modern electronics — are very sensitive to these power surges. The induced current burns and destroys them. They are so sensitive, in fact, it has been theorized that a single nuke, detonated in the right part of the upper atmosphere, could take out most of the unprotected computers in the United States. Also, it is theorized that a high-intensity EMP burst could destroy silicon transistor circuitry even if the device is turned off. Military hardware has to be specially shielded to withstand most of the effects. Interestingly, ancient computers from the 1950s would also be resistant; they were built with vacuum tubes, which can take the pulse a lot better than modern transistors, especially if they were powered down at the time. Also, it's possible that early transistors, which were made of germanium rather than silicon, might be able to withstand an EMP if the device is powered down.

If you want to do this zapping without the nuclear fallout, there are a few smaller weapons

that can generate an EMP. Such a thing is usually a kind of single-use electric generator, which sends out its pulse when crushed by a conventional explosive. The pulse is far weaker, and can kill maybe an office full of computers. In case you wonder why the same explosive charge alone couldn't do it, a range can be extended by rigging up a generator to get a directional emission of microwaves instead of a plain magnetic surge. Getting a city-sized EMP without a nuclear bomb is not feasible with current technology; as to reusable variants, if we had the capacitors necessary to do that, we could also build practical railguns and laser rifles. It is also possible to build a portable EMP jammer on your own

with a disposable point-and-shot camera's electrolytic capacitor, a generator and a coil.

Weapons aren't even needed to create an EMP, though; a gamma ray burst or supernova far enough away to not fry the Earth with enough ionizing radiation to actually pose a threat to human life itself could also accomplish creating a global disaster from an EMP.

A more docile variant of EMP is "degaussing", which uses a varying magnetic field to remove magnetism from a metal object. Ships in WWII were degaussed to make them less vulnerable to magnetic mines. The last generation of CRT monitors, which were what most desktop computers used before LCD/LED displays took over, had built-in degaussers to eliminate color aberrations caused by stray fields. And bulk erasers, an even smaller and lower powered version of this, is used to destroy the data on magnetic storage devices (very popular with the BOFH).

When Hollywood talks about EMP, it can generally be filed under Artistic License – Physics.

Emp? You have got to be fucking ki—

Lucas Crowe aka Ghost, a rogue CIA agent, conducts an EMP attack on Fort Totten in order to infiltrate it.

Lucas Crowe aka Ghost, a rogue CIA agent, conducts an EMP attack on Fort Totten in order to infiltrate it.