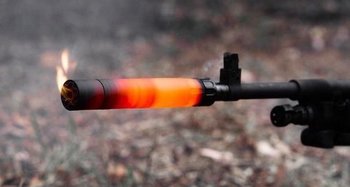 Some games give you unlimited ammo, but the designer doesn't want you to fire continuously, so your gun will overheat if you fire continuously for too long, and you have to wait for it to cool down before you can use it again. Alternatively, you may have to reload, but have unlimited magazines. The heat management mechanic allows players to fire in shorter bursts to keep the weapon cool, while the magazine mechanic places a hard cap on how many rounds can be fired before having to reload. This doesn't just apply to guns. For example, a motorcycle overheating if you go fast for too long.

A particularly bizarre version can occur in games that feature mounted and handheld versions of the same machine gun, which may be governed by totally separate rules; for example, one may require reloading while the other does not but is able to overheat.

This can be partly considered an example of Truth in Television, as the dissipation of waste heat from various forms of technology is a major design consideration that is often overlooked; however, in video games the effect is typically exaggerated by a variable margin in terms of speed and grossly understated in terms of severity; overheating a machine gun will typically cause it to steam as if it has a water jacket, without the risk of rounds spontaneously igniting (known as "cooking off") or permanent barrel damage that come with overheating a real gun. May be partially justified by having the overheat meter represent a safety threshold imposed by an automated weapon control system or the shooter himself, and not the absolute maximum temperature at which the weapon is capable of firing. However, keeping firing at the risk of weapon damage is generally not an option. Typically, the quick-change barrels of modern machine guns are not represented, either, and there is no way to deal with an overheated barrel but wait for it to cool back down (which, for gameplay reasons, happens surprisingly fast).

Gatling Guns, especially of the modern Minigun variety, often fall victim to this trope, despite the fact that delaying the onset of this trope is the entire point of their multiple rotating barrels.

Essentially an inverted Charge Meter, and similar in function to a Sprint Meter, though the latter will generally go down instead of up. A sub-trope to Ability Depletion Penalty in games. Compare Cooldown, another way of regulating weapon/ability use. Contrast Pent-Up Power Peril when danger comes from the lack of use rather than overuse.

If the weapons are in space, it's an aversion of Space Is Cold.

First-Person Shooter and Mass Effect have their own subpages.