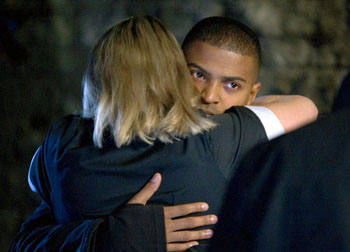 See ya, Mickey...
Mickey: Let's go liberate Paris.
Jake: What, you and me? In a van?
Mickey: Nothing wrong with a van. I once saved the universe with a big yellow truck.

The one with a Cyberman that left its high-beams on.

Written by Tom MacRae, this episode was adapted in part from Marc Platt's Big Finish Doctor Who episode "Spare Parts".

When we left off, in "Rise of the Cybermen", Rose and the Doctor were unsuccessfully trying to surrender to Cybermen. The Doctor uses a trinket from the TARDIS — the small Artron cell — to give the Cybermen a dose of Agony Beams. After the getaway, Pete reveals himself to have been The Mole for the good guys all along, and Ricky reveals himself to be much less of a badass than his friends thought he was (London's Most Wanted... for parking tickets) and promptly manages to get himself killed. The gang flees for now, but massive cyberconversion is already under way.

The Doctor decides that the best way to stop the invasion is to cancel the emotional inhibitors on the Cybermen, which would drive the humans inside insane and kill them. Rose and Pete infiltrate the factory by posing as brainwashed people, and encounter Jackie, who's already been turned into a Cyber(wo)man. Mickey and Jake (Ricky's boyfriend

) infiltrate the zeppelin that's parked right on top of the factory, and watch from a screen as the Doctor, Rose and Pete are all taken in for questioning. When the Doctor realizes that Mickey can see and hear him, he and Pete surreptitiously give Mickey the code needed to hack the system. Mickey texts the solution to Rose's cell phone, the Doctor jams it into the control system, and the Cybermen regain their full consciousness and sanity. The ensuing Body Horror causes them to overload, and they die in anguish.

Mickey, deciding that he's grown from his experiences in Pete's World, wants to see its liberation through to the end. He stays in the alternate reality with his not-dead grandmother (who will live for a few more years) and helps the now-dead Ricky's friend destroy the rest of the Cyberfactories. Rose and the Doctor return home.