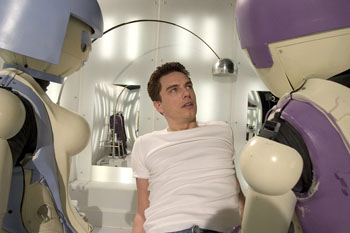 Makeup!
"I'm gonna rescue her! I'm gonna save Rose Tyler from the middle of the Dalek fleet, and then I'm gonna save the Earth, and then — just to finish you off — I'm gonna wipe every last stinking Dalek out of the sky!"
— The Doctor
Advertisement:

The one where Jack gets naked.

Also the one in which Christopher Eccleston eats all the scenery in glorious rage!

The casual viewer might be forgiven for assuming that they've ingested the wrong substances and are hallucinating a Doctor Who/Big Brother crossover, but no — the Doctor really has landed in the Big Brother house. Of the 2002nd century. He's as confused as the casual viewer.

Rose, meanwhile, has ended up in a futuristic Doctor Who/The Weakest Link crossover; and Jack Harkness in a Doctor Who/What Not to Wear crossover staffed by female robots (with whom Jack flirts). The casual viewer may be forgiven for thinking that this is all rather strange...

No, it's a Massive Multiplayer Crossover. All three have landed in the Game Station, which the Doctor and Rose visited back when it was called Satellite Five. The Doctor expected history to get back on course once the Jagrafess was removed, but is horrified to learn that the power vacuum caused human civilisation to collapse instead. It's 100 years later, Earth is a smog-covered hellhole, and the giant space station is now a home for more lethal versions of 21st-century reality TV, such as Call My Bluff (with real guns), Countdown (where you've got thirty seconds to stop a bomb from going off), Stars in Their Eyes (literally — if you don't sing, you get blinded), Wipeout (speaks for itself), and Ground Force (the really nasty version where losers get turned into compost). Anyone on Earth can be selected as a contestant and transmatted into a game with no warning, but the Doctor realises that any transmat beam capable of pulling him out of the TARDIS had to be far, far more powerful. Someone wants him here, and he's going to find out who.

The Doctor and Jack escape from their crossovers; the Doctor by realizing he's too important for the system to kill, and Jack by... see page quote. The Doctor also takes a girl named Lynda along as a future companion. They all rejoin Doctor Who, but Rose is still stuck inside her game, and she's losing. In fact, she's lost, and the host robot vaporises her. Christopher Eccleston conveys more hurt and loss with his eyes than most actors can on a steady diet of scenery.

The Doctor, Jack and Lynda (with whom Jack flirts) are informed that they will be taken to the Lunar Penal Colony to be held without trial or appeal. They respond by breaking out in five seconds and making their way to floor 500 — still not made of gold — where the Doctor demands to know who's in charge and who just killed his friend. Unfortunately, the Controller — the human supercomputer in charge of the satellite, who was installed at the age of 5 — can only communicate with members of staff. One such staff member (with whom Jack flirts), however, has been keeping a log of mysterious encrypted signals and unauthorised transmissions, and he agrees with the Doctor's theory that this whole operation is just a cover for something else.

The TARDIS turns up in one of the storage bays, but the Doctor's mood doesn't improve until Jack shows him that Rose wasn't disintegrated, merely transported (hug time!).

A solar flare interrupts transmissions long enough for the Controller to explain that she brought them all there, and that she knows who's been behind everything in this period but cannot speak their name. All she can tell the Doctor is that they fear him. As the flare subsides, she is forced to stop talking so her mysterious bosses don't hear. The Doctor tries to figure out where the contestants are transmatted to, and the Controller, despite knowing her masters can hear her now, tells him most of the coordinates before she too is transmatted away. The Controller emerges surrounded by her unseen "Masters", to whom she gloats, saying that she has destroyed them. As soon as she mentions the Doctor, she screams in pain and her skeleton is briefly visible through her illuminated skin, before she collapses, dead.

Then Rose wakes up, face to cybernetic eye with someone who can't possibly exist. After all, she saw them die...

The Doctor and Jack pinpoint the transmat beam's location... a seemingly empty spot in space. The Doctor realizes the satellite's true purpose - underneath the usual transmissions is a cloaking signal, rendering whatever's out there completely invisible. What does he find when he cancels it? An alien warship... and another... and another. There are, in fact, two hundred flying saucers sitting right on the edge of the solar system.

Jack: That's impossible. I know those ships. They were destroyed.
The Doctor: [utterly shellshocked] Obviously they survived.
Lynda: Who did? Who are they?
The Doctor: Two hundred ships. More than two thousand on board each one. That's just about half a million of them.
Davitch: Half a million what?
The Doctor: Daleks.

Aboard the mothership, the Daleks realize they've been exposed and open a direct link to the Doctor. Their ultimatum: either he stands down or his "associate" dies. The Doctor, after a second, refuses to be intimidated. Yes, he's completely outnumbered, utterly outgunned and has no plan whatsoever to get out of this. But after all this time, one thing hasn't changed: he still scares the Daleks more than they scare him.

Proving him right, the Daleks panic en masse — their oldest and greatest enemy has found them, right on the verge of their return, and the time for subtle manipulation is over. Rose can only watch as the entire legion rises to invade Earth, screaming their one, true war cry: EXTERMINATE!

You are live on channel forty four thousand. Please do not swear.
Feedback

The Doctor arrives too late to save Rose, and collapses as Rose is "disintegrated" in front of him.

The Doctor arrives too late to save Rose, and collapses as Rose is "disintegrated" in front of him.