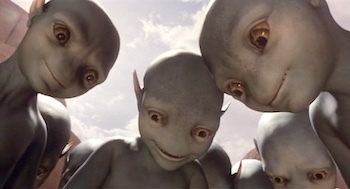 By the time you've figured out how to tell them apart, you're dessert.
Luke Rattigan: How... do you tell each other apart?
General Staal: We say the same of humans.
— Doctor Who, "The Sontaran Stratagem"
Advertisement:

The tendency for all aliens, within a given species, to look almost identical. This is contrary to human expectations, where the diversity of appearance within even single families of humans is remarkable. With extraterrestrials there is no evidence of this racial or ethnic diversity. Everyone from the same species will look almost exactly alike.

The technical reasons for this stem from the aliens' real-life origin. If they're Rubber-Forehead Aliens, then the rubber forehead, if it is of sufficient weirdness, makes every actor who wears it look alike. If the aliens are Serkis Folk, the modelers got lazy and only designed one computer model (this is also why this is common in video games). If the aliens are Big Creepy-Crawlies, well, all bugs look the same anyway.

If anyone tries to point this out, the alien character will most likely respond that they look nothing like their compatriots and might shoot back, "To me, all humans look the same," implying that there are indeed differences that the untrained eye might not pick up. Alternatively, they may accuse you of Fantastic Racism. Counterintuitively, this is one way in which Human Aliens are more realistic than the more "complicated" types.

A potential explanation is that aliens tell themselves apart by non-visual signals. Many real animals, who may or may not know each other visually, get lots of information just from scent, but this is rarely used as a device unless the aliens are particularly inhuman.

Interesting side note: Some evidence suggests that humans have trouble discerning differences between faces that belong to a group they are unfamiliar with. "They all look the same", therefore, has some basis in fact. This is the basis of the Racial Face Blindness trope. However, this effect fades with time and exposure to different individuals of said different groups. Therefore, a sheltered Westerner moving to Korea will, after initial difficulty, eventually be able to tell his neighbors apart quite well. One can assume the same would hold true if he moved to Alpha Centauri.

See also In the Future, Humans Will Be One Race. Compare Planet of Hats and Inexplicably Identical Individuals. Contrast Cast of Snowflakes, where even the aliens look different from each other.