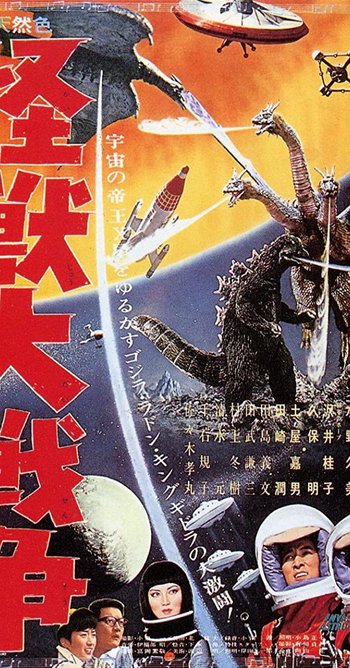 Advertisement:
"On Earth, you gave this terrifying monster the name of Ghidorah. Everything is numbered here. The Monster is Zero"
— The Controller of Planet X

The sixth entry in the Godzilla franchise, Kaijū Daisensō (The Great Monster War), initially released in the US as Monster Zero, also known as Invasion of Astro-Monster, and Godzilla vs. Monster Zero, is a sequel to Ghidorah, the Three-Headed Monster and stars Akira Kubo, Akira Takarada, Kumi Mizuno, Yoshio Tsuchiya, Jun Tazaki, and the late Nick Adams. This would also be the first film in the Godzilla series to use the alien invasion plot, but it would not be the last. The Japanese version of the film takes place sometime in the near future, while the American version never specifies when the film takes place.

In either version, the movie begins with the P1, a World Space Authority spaceship, making its way to Planet X, a newly-discovered planet that lies between the orbits of Jupiter and Saturn. On board the ship are astronauts Glenn (played by Nick Adams) and Fuji (played by Akira Takarada). After they arrive on Planet X, the astronauts discover that the planet has gravity similar to earth, and an atmosphere of some kind to boot. However, the planet is not as peaceful as it seems, and both astronauts witness lightning and thunder, before they meet the planet's inhabitants, the Xilians. The Xilians live inside of the planet, being forced to do so because of Monster Zero, who Fuji and Glenn recognize as the dreaded King Ghidorah. The Xilians ask the Earth men for a favor: let them use Godzilla and Rodan to drive the terrible beast away, and in return they will give Earth a cure for cancer (or all diseases in the American version).

Back on Earth, Fuji's sister is in a relationship with a bumbling inventor named Tetsuo (played by Akira Kubo), who has developed a device called the "Lady Guard Alarm," which produces an extremely annoying sound. While Tetsuo doesn't see a whole lot of potential in his device, it has been bought by a toy company, for reasons that he can't understand. After Glenn and Fuji return to Earth, some interesting things happen. First, it is revealed that Glenn's girlfriend, the beautiful Miss Namikawa (Played by Kumi Mizuno) is also an employee of the toy company that bought Tetsuo's invention. Second, the company has no interest in selling the Lady Guard Alarm.

When the time comes for the Xilians to retrieve Godzilla and Rodan, everyone learns that the aliens are already here. The Xilians capture Godzilla from lake Washigasawa and Rodan from the side of a mountain. When questioned about their already being on earth, the Xilians apologize for not saying anything. Glenn and Fuji both return to Planet X with the aliens, alongside Doctor Sakurai (played by Jun Tazaki). After arriving on Planet X, Godzilla and Rodan engage Ghidorah in battle and win. Godzilla then does a weird victory dance, or has "A happy moment," as the Xilian leader puts it. While the monster battle was going on, Glenn and Fuji had left their observation room and decided to explore the rest of the Xilians' home. Glenn soon makes an interesting discovery when he sees two Namikawas in the same room. Glenn is initially stunned by this, and Fuji is equally perturbed.

After being returned to Earth, a conference is held where the Xilians' miracle cure will be revealed. Instead of a cure, however, the Xilians order for Earth to surrender, become a colony of Planet X, surrender their water, and submit themselves as a food source. The Xilian leader threatens to unleash Godzilla, Rodan, and King Ghidorah if the Earth does not surrender. Following this is a montage of riots and civil actions around the world as the Xilians begin taking over. Glenn is wandering through an abandoned office building when he encoutners Namikawa, dressed like an Xilian. "That's what I figured," Glenn says to her. Namikawa begs Glenn to side with the Xilians so that they can both live together, but Glenn tells her that Earth will fight to the very end. The two lovers are soon interrupted by a squad of Xilians, who tell Glenn that he is under arrest. Namikawa rushes over totell Glenn that she loves him, slipping a note inside his pocket as she does. After this display of affection, Namikawa is pulled away from Glenn and vaporized.

Glenn is soon thrown into a jail cell on an island, where he finds Tetsuo. Tetsuo had been captured earlier, when the Xilians were leaving with Godzilla and Rodan, when he followed Namikawa here. He then learned that the toy company was a front by the Xilians. Tetsuo tells Glenn that he's tried everything possible to escape, and that the walls and bars of their cell are sound-proof. Depressed, Glenn finds a note in his pocket, from Namikawa. In the note, Namikawa tells Glenn that she loves him, and that the Xilians can be defeated by "a certain, simple sound." Tetsuo realizes that this is why the aliens bought his invention, to prevent anyone else from producing it. Since the aliens never bothered to check Tetsuo for weapons, he still has a Lady Guard Alarm with him, which he and Glenn use to escape.

Unfortunately, the Xilians have already unleashed the giant monsters, who begin wreaking havoc across the country. After escaping and finally returning to their comrades, Fuji reveals that the aliens control the monsters with some kind of mind control rays, and that Fuji and his comrades have been working on the "A-Cycle Light Ray" which should block the mind control. Glenn tells Fuji about Tetsuo's invention. Armed with this knowledge, the device is put into production. After preparations are complete, people around the country are asked to turn up their radios' and television sets' volumes as high as they can go. The sound of Tetsuo's Lady Guard Alarm begins broadcasting all over the place, and coupled with the A-Cycle Light Ray and other weapons, the Xilians are finally defeated. However, King Ghidorah must still be contended with, and both Godzilla and Rodan are eager for a fight. The three monsters do battle, eventually tumbling into the ocean, where upon Ghidorah emerges and flies off into space. The film ends with Doctor Sakurai telling Glenn that he's going to be an ambassador to Planet X.

Followed by Ebirah, Horror of the Deep.