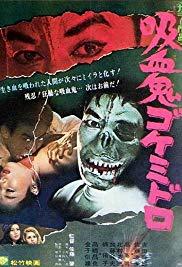 A fiendish vampire from a strange world in outer space drains his victims' blood and turns them into weird corpses!
Advertisement:

A plane in flight is notified of a bomb threat called in. Later it's revealed that the bomb threat is a hoax, but the pilots are told to return to the airport. This leads one of the passengers, a man in a white suit, to pull a gun and hijack the plane, demanding that they fly to Okinawa. It turns out that the man in the white suit is an assassin who is trying to make his escape after assassinating the British minister.

The plane heads for Okinawa but the pilots soon see a scary glowing light in the sky. The oncoming light causes the plane to crash. The survivors include: the hijacker; Sugisaka, the co-pilot; Kuzumi, the beautiful stewardess; Mr. Moto, a slimy corrupt politician; Mr. and Mrs. Tokiyasu, an arms dealer and his wife; Momotake, a psychiatrist; an unnamed young man who turns out to have been the one that called in the bomb threat; and Mrs. Neal, an American white lady who was headed to Okinawa to retrieve the remains of her husband, a soldier killed in Vietnam.

The hijacker attempts to make his escape after the plane crash, dragging Kuzumi along as a hostage. But the two of them soon run into an alien spacecraft, and a mysterious gooey blob rips a tear in the hijacker's head and crawls into his skull...

The film is part of The Criterion Collection, as part of Eclipse Series 37.