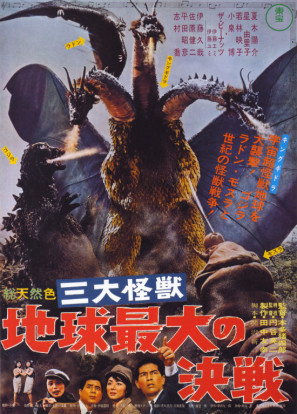 "Gentlemen, we need whatever help we are able to obtain. In this case, it makes no difference, where we finally get that help from."
— General Wado
Advertisement:

Ghidorah, the Three-Headed Monster is a 1964 Japanese science-fiction kaiju film and the fifth film in the Godzilla franchise, which marked a few changes in the series. It was the first to deviate from the tried and true "giant irradiated mutants from a Lost World trample Tokyo" plot of the previous four films by introducing elements of the space operas and UFO culture that was prevalent in the '50s and '60s. This experiment would be expanded upon in later films. Called San Daikaijū: Chikyū Saidai no Kessen in Japan.

More importantly, Ghidorah, the Three-Headed Monster marked a change in Godzilla as a character, one that was arguably necessary for the franchise to continue. After having played the villain for four movies straight, Godzilla switches sides in the third act of this film to fight an even worse monster than himself: the planet-destroying King Ghidorah. This change in Godzilla's role would be slowly built upon in the following movies, and set the groundwork for the change in tone that would occur between the first and later halves of the Showa Godzilla series.

That's not to say it's all seriousness and high art, though. There is a fair deal of the silly and goofy atomic age monster movie weirdness one would expect from a good Godzilla movie. Magnetic meteors, assassination plots, princesses disguised as homeless prophets, tiny fairy women on talk shows, and Martians (or Venusians in the Japanese version) possessing human hosts all collide in this movie as three of Toho's biggest monsters join forces to fight a golden three-headed space dragon with "a voice like a bell."

Despite breaking the new the groundwork for the majority of the films that would follow, Ghidorah pretty much never saw theatrical distribution outside Asian and American territories for some reason.

Followed by its direct sequel Invasion of Astro-Monster.