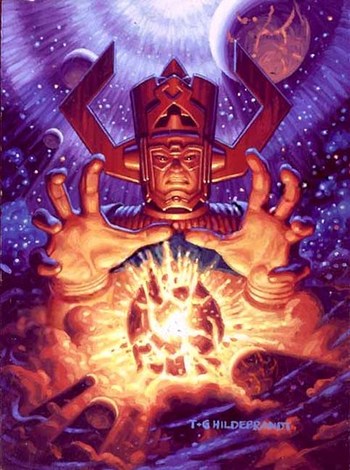 Planets are nothing to Galactus, eater of worlds.
"I've destroyed whole planets. So what chance have you got?"
— Dark Phoenix, Marvel vs. Capcom 3
Advertisement:

Reality Warpers and Physical Gods come in different levels of power, but one way to indicate that a being or artifact is serious business is to make it clear that they could effortlessly destroy one or more planets without breaking a sweat.

In order for this to apply, either in-universe evidence or Word of God must exist to show beyond a doubt that it is the case. It often uses a Sacrificial Planet and/or overlaps with Apocalypse Wow. Characters this applies to are always at least 5 on the Super Weight scale, but this does not always apply to characters that are a 5 or higher.

Supertrope to Planet Eater (because beings who eats planets for breakfast would necessarily be strong enough to destroy them), and almost always considered a Superweapon by those on the planet if it's not a living being.