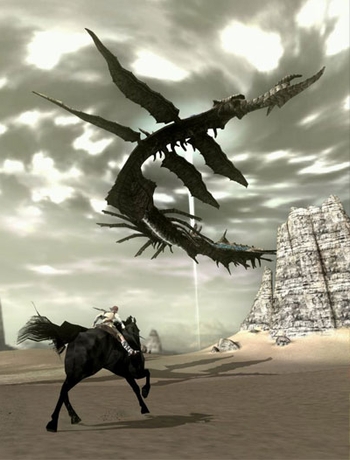 Just how are you going to climb that mountain, hmm?
"... it was a winged creature: if bird, then greater than all other birds, and it was naked, and neither quill nor feather did it bear, and its vast pinions were as webs of hide between horned fingers; and it stank. A creature of an older world, maybe it was..."
— The Return of the King
Advertisement:

Large flying creatures are a staple of Fantastic Fiction. This trope comes in a few distinct flavors:

In Real Life, the largest flying birds are limited by the manner in which avian flight feathers grow, and historically have never been much bigger than even modern condors and albatrosses (wingspan about 3.5m) with the exception of the condor-like Argentavis and the seagoing Pelagornis sandersi (both with wingspans perhaps up to 7m). Pterosaurs evolved to be much larger, but then anything bigger than a Quetzalcoatlus (wingspan about 10m) is running up against the Square-Cube Law — it gets really difficult to take off, since the wings become too heavy to overcome their own weight, let alone the rest of the body. The largest bird species generally spend most of their flight time gliding rather than flying, and prefer to land on a high point rather than the ground, as they tend to need a downward dive at the beginning of a flight to build up momentum. In fiction, if any effort is made at all to explain why an overly large flying creature can exist, the go-to explanations are low-gravity planets and magic.