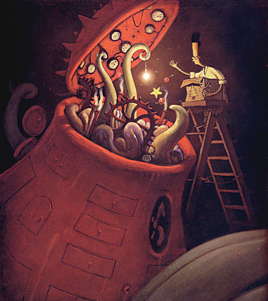 Written and illustrated by Shaun Tan, The Lost Thing follows an unnamed narrator as he tells the reader, in flashback, about that time he found a lost thing—the lost thing being some bizarre, giant octopus/crab mix that's wearing a red metallic shell—and tried to find it a home.

It was adapted into a 15-minute animated short film in 2010, directed by Tan and Andrew Ruhemann, narrated by Tim Minchin. It won the Academy Award and the Hugo for Best Animated Short.

This story contains examples of the following: