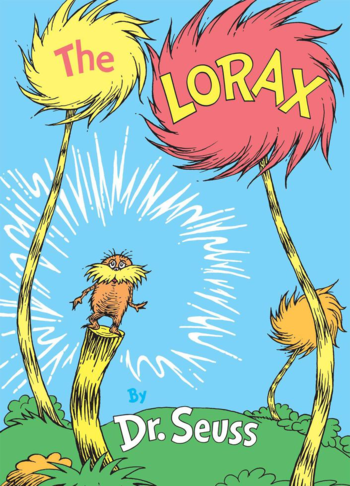 He's the Lorax. He speaks for the trees.
Unless someone like you cares a whole awful lot, nothing's going to get better. It's not.
Advertisement:

The Lorax is a story written and illustrated by Dr. Seuss that was first published in 1971. It is an environmentally-oriented story about a person named Once-ler (shown only as a pair of green arms) who caused devastation to the land and was constantly scolded for it by a creature called the Lorax, whose warnings the Once-ler had ignored until it was too late.

The Lorax was adapted into a TV special in 1972 by De Patie Freleng Enterprises and featured Bob Holt as the voices of the two main characters of the story. A feature-length film from the producers of Despicable Me was released in 2012, with Danny DeVito as the title character.

Not to be confused with Lomax.