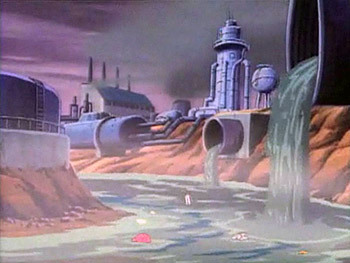 A polluted wasteland, much to the displeasure of our mother.
Come see our river that catches on fire!
It's so polluted that all our fish have AIDS!
— Mike Polk Jr., "Hastily Made Cleveland Tourism Video, Attempt 2"
Advertisement:

The Polluted Wasteland, often found in more realistic, dystopian or Sci-Fi settings, is an Aesop against abusing resources. Its inhabitants stripped the land of everything good, and polluted the air. This may justify the activities of Planet Looters who raid other worlds for the resources that they've squandered on their own.

Unlike its fantasy counterpart, Mordor, defeat of the Big Bad won't necessarily return the land to its pristine state — though Hope Sprouts Eternal is quite common. Quite often, this also involves big sprawling cities that somehow became something worse than the run-down ghettos of São Paulo, or big sprawling industrial zones that breathe smoke 24/7.

A Polluted Wasteland will often stand in contrast to a pristine natural setting, such as the Ghibli Hills or an Enchanted Forest, which may exist as a separate area or be what the Wasteland used to be — or what it may become once again.

Compare Forbidden Zone, I Don't Like the Sound of That Place, Nightmarish Factory, Crapsack World, Gaia's Lament. Frequently a byproduct of Toxic, Inc..