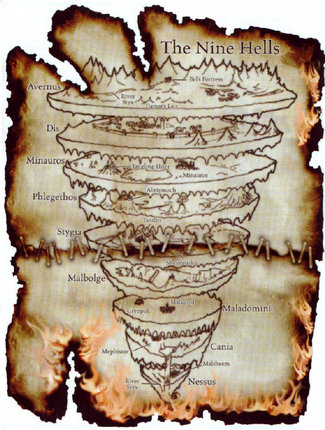 If you think this is bad, you should see the other place.
"Cigars are evil, you won't miss 'em
We'll find ways to simulate that smell
What a sorry fella
Rolled up and smoked like a panatella
Here on Level 1 of Robot Hell!"
— The Robot Devil, Futurama
Advertisement:

It's not bad enough to have just one plane of eternal torment. Many times, Hell has multiple layers, with those layers being tailored toward punishing certain kinds of evil, and the ones further down holding even more horrible punishments than the upper layers. Fire and Brimstone Hell is usually just one of the lesser levels; sometimes they really get creative. As such, it's common for this trope to be partnered with Ironic Hell, usually by grouping similarly themed punishments into shared areas.

Often, Heaven will have a number of layers as well, corresponding to varying degrees of holiness and/or purity.