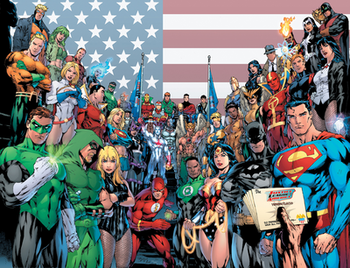 Composed (usually) of the heavy hitters of The DCU, the Justice League has been around in one form or another since The Silver Age of Comic Books, and doesn't show any sign of going away. The team debuted in The Brave and the Bold #28 (February-March, 1960), created by writer Gardner Fox and artist Mike Sekowsky. Just as DC rebooted several Golden Age characters with new Silver Age versions, the JLA is the same for the Golden Age Justice Society of America. Their appearances in three consecutive issues of The Brave and the Bold served as a trial run. The concept sold well and the team graduated to its first eponymous title by October, 1960.

In the '80s, DC's editorial team noticed that they were being outsold by the Teen Titans and the X-Men, more action-oriented, character-driven teams. So, suddenly, Aquaman gave a big speech about how the team couldn't depend on heroes who were too busy to show up all the time and reformed the team with a bunch of second-stringers and a few new characters. They operated out of a warehouse in Detroit. For this reason, they were a little ineffectual during Crisis on Infinite Earths.

This approach fizzled after a few years, so DC took the team back to basics by reuniting the original Big Seven and giving them a lunar Watchtower base. The series was relaunched as JLA (1997) by Grant Morrison, who emphasized the team's role as the "gods" of the DCU, and had them only go up against the sort of tremendous, cosmic-level threats which befitted that stature. This new approach was such a hit that for several years pretty much all major events in the DCU revolved around the League, and countless miniseries and one-shots were spun off the new title. After Morrison left, succeeding writers (most notably Mark Waid) continued his approach.